Looking forward to Crisis Core but don't remember the difference between a Jenova and a Shinra? This feature has all you need to get back up to speed.

Final Fantasy VII is a misleading title. In fact, the game is about as final as a midterm, and though its title labels it the seventh game in one series, it also marks the first entry in a growing series of its own, known as the Compilation of Final Fantasy VII. The latest addition to this ever growing library is Crisis Core: Final Fantasy VII, the story of a SOLDIER mission to the rustic town of Nibelheim.

This should sound somewhat familiar because the original Final Fantasy VII's most mind-bending plot twist centered on Cloud's shattered memories of this event. But if the details are hazy, fret not, for Crisis Core: Final Fantasy VII picks up the pieces to tell the story of an unknown soldier named Zack, while shedding new firelight on the downfall of Sephiroth. Unfortunately, the original came out so long ago that you may not remember what any of this had to do with the price of Mako in Midgar. Cue Franchise Player!

The Final Fantasy VII series is full of awesome characters. The following folks play the largest roles, but that doesn't mean they are necessarily the best, coolest, or most important to the Crisis Core storyline. Well, except for Zack. Though several of the series' most colorful heroes and villains aren't listed here, we thought you might prefer to rediscover them in the course of your own fantastic voyage. And so, without further ado...
Cloud Strife 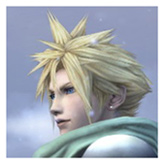 With spiky hair and a sword so big it would make Ron Jeremy jealous, Cloud Strife is one of the most iconic video game characters of all time, rivaling mustachioed Mario or birthmarked Kratos for instant recognition. But who really knows this enigmatic hero? Certainly not Cloud himself. In fact, his own recollection of events is proven to be an illusion late in Final Fantasy VII. Was he really one of Shinra's elite warriors, a first class SOLDIER? Or was he something else entirely? 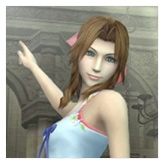 The girl you thought you knew as Aeris is actually named Aerith. Evidently, the designers of Final Fantasy VII intended to name her after the English term Earth, but something got mixed up in the double translation from English to Japanese then back again and she wound up as Aeris in Final Fantasy VII.

But a rose by any other name smells just as sweetly, and since you paid for the fantasy, you can call her whatever you want. Just don't call her mean, petty, or shallow because Aerith was a virtuous, pure hero and the last of a noble race, the Cetra. This being a Japanese role-playing game, you just knew something bad and vaguely sexual was going to happen to her. And if you didn't, you probably cried real tears when your awesome healer got impaled on Sephiroth's wimpy sword in Final Fantasy VII. Though she never came back to life as nerds worldwide hoped she would, her spirit swims on in the lifestream. Who knows what she does in there...possibly the butterfly stroke? 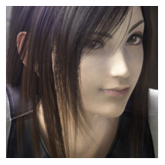 Tifa is the opposite of Aeris. Instead of a dress, she wears a miniskirt. Instead of flowers, she sells booze. And she isn't the last descendant of a holy race fated to save the planet with a dying prayer. Tifa is Cloud's former next door neighbor, a pedestrian village girl who kicks a** with her plain old boots. But in a series where the taint of a space alien queen threatens to pollute the metaphysical lifestream, her down-to-earth presence provides a refreshing breath of stale air. She'll never save the world, but she'll make it worth saving. 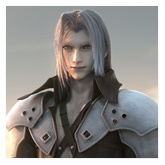 Likes: Hair conditioner
Dislikes: Everything else
One Bad: Mother

In the kabbalah (an ancient Hebrew text), the Sephiroth are God's identifying features. They generally include such noble things as wisdom, symmetry, and good table manners. In Final Fantasy VII, Sephiroth has all the identifying features of villainy. He has long white hair. He wears a trench coat. He's androgynous. He has a cool name. He stabs nice girls. He wants to be God. And he doesn't just want to destroy the world, he wants to possess its soul. He was literally born to be bad, and that isn't just another careless use of the word "literally." Sephiroth is the biological son of the mad scientist Dr. Hojo and was treated with Jenova cells (think Gamma radiation, but evil) in utero. He puts the Crisis in Crisis Core. 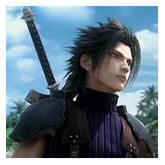 Who is Zack Fair? For starters, he's the main character in Crisis Core and a SOLDIER first class who joins Sephiroth on the Nibelheim mission. Remember the SOLDIER Aeris said she dated in Final Fantasy VII? No? He was also this guy. Remember the previous owner of Cloud's buster sword? Yeah, that's him too. We'd tell you more, but that would spoil half the fun of Crisis Core.

Jenova
She's an intergalactic zombie hell queen bent on the corruption of all life and kept in a secret tank like the world's scariest gold fish by a company known as...

Shinra
Shinra is just your average everyday world-conquering energy company. It isn't evil, just greedy, and so it isn't destroying the planet on purpose, but rather, by accident. Its power source is mako, which is kind of like uranium, except instead of making cancer happen, it makes magic happen. Shinra is so crazy about mako that it unearths Jenova thinking she'll lead them to more. Hey, crazier things have been done for lower prices at the pump.

AVALANCHE
Like violent hippies with guns, swords, and magic, the members of AVALANCHE stand up for the little guys and gals Shinra is willing to walk all over on its way to more mako. But when the AVALANCHE gets wrapped up in the cosmic struggle between the spawn of Jenova and the lifestream, its political struggles become existential.

Lifestream
Lifestream looks like green vermicelli, and it can explain everything. Seriously, if you're ever on a video game quiz show and a hard question comes up about Final Fantasy VII, the answer is lifestream. It's like essence of miracle combined with the soul of the planet--plus pesto.

Once you finish Crisis Core, we're sure you'll be in the mood for more Final Fantasy, if only to see how the revelations contained within it color your understanding of the other entries in the Compilation. Don't forget to visit: 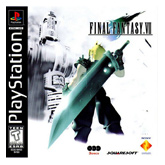 Final Fantasy VII didn't just start a series, it arguably started the PlayStation system. It also started with Cloud Strife joining a group known as AVALANCHE to stop the corrupt and wicked Shinra Corporation from ruining the planet. Then, things got weird. There were talking cats, giant chickens, houses with legs, an unexpected demise, and one of the craziest evil plots of all time. Sephiroth was going to call a meteor down to hit the planet and, then, when lifestream (if the opposite of entropy existed as water) poured into the gash like blood, he'd be waiting to fuse with it, taking over the soul of the planet. Why did we stop this again? 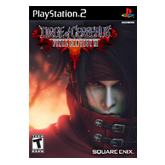 A third-person shooter/RPG, Dirge of Cerberus takes place after the events of Final Fantasy VII and chronicles the attempt of an organization known as Deepground to damage the earth, as well as summon a big weapon, which will then wreak even further havoc. The only man in its way is the enigmatic Vincent Valentine, the pseudovampire gunslinger. With the help of the rest of the Final Fantasy VII cast, he battles Deepground while unearthing new details about Sephiroth's mother and Doctor Hojo. 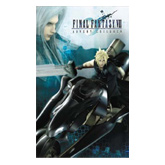 This awesome CGI action flick covers the period after AVALANCHE stopped the meteor from wrecking the planet. It also includes a trio of new villains, a ridiculously fun fight with Bahamut in the city of Midgar, and appearances by the Final Fantasy VII cast. Most of the film follows Cloud as he attempts to rescue himself and the city's children from a mysterious disease, but the best part is a major battle with a certain white-haired villain you simply have to see if you consider yourself a Final fan in the slightest.

There's much more to Final Fantasy VII, including the short story collection On the Way to a Smile, the animated film Last Order: Final Fantasy VII (which chronicles many of the same events as Crisis Core), and an episodic mobile phone game called Before Crisis: Final Fantasy VII. Some of these are easy to find, while others nearly impossible, but whether or not your Japanese is good enough to plumb the most exotic corners of Final Fantasy lore, you'll have plenty to chew on with the release of Crisis Core: Final Fantasy VII. And after that, you may not have long to wait for more.

There are 468 comments about this story
Load Comments (468)