Earlier this week, we told you about some of the ways that multiplayer will work in Final Fantasy Crystal Chronicles: Echoes of Time, the latest entry in Square Enix's line of lighthearted action role-playing games. Echoes of Time is a game that functions nearly identically on the Wii and DS--right down to the Wii version sporting a pair of independent screens--and it lets you connect up to four players using both versions. However, we've recently had the chance to get a better feel for what sort of story and single-player features you can expect out of the game.

Like any role-playing game worth its salt, Echoes of Time begins with you creating and naming your own character. You're given a choice of four different tribes, each of which offers two gender variations. The Clavat, Selkie, and Lilty are all cherublike warrior children, whereas the Yuke is a masked and winged humanoid that reminds us somewhat of a steampunk velociraptor. Each tribe has its own strengths when it comes to battle, such as Lilties being adept spear wielders and Yukes possessing top-of-the-line magic skills.

The story in Echoes of Time begins with the familiar coming-of-age theme often used in the Final Fantasy series. Your character has recently turned 16 and is thus sent on a quest to fight a monster in the local forest. It's on this first quest that you'll get a taste for the game's combat system, which allows for real-time attacks and spells rather than the turn-based system that you may have seen in other games that carry the Final Fantasy branding. The control scheme uses four primary buttons: attack, jump, pick up objects, and cast spells. It's a light, simple system that shouldn't take much time to pick up and learn, especially if you've spent much time with other RPGs.

Soon after returning from this first quest, you discover that a local villager has fallen ill to a mysterious disease known as crystal sickness. As the town's closest thing to a hero, you take it upon yourself to set off on a journey to discover a cure for this disease. This brings you from your sleepy little forest village to a much bigger town, and that's where you're introduced to a bustling population offering various services that will aid in your heroic deeds over the rest of the game. There's an adventurer's guild offering side quests, item shops that let you craft your own personalized weapons and armor from materials that you find in battle, and roaming mercenaries who you can add to your four-person crew of adventurers.

If you spend a bit of time chatting up the town's citizens, you'll be directed toward the library. It's there that you'll meet a bespectacled researcher who sports a thick German accent and a desire to help you find a cure for crystal sickness. He sends you on a quest to find a buffasaur horn, which is accomplished by going on a good old-fashioned dungeon crawl through the town's sewers, eventually reaching a boss fight against a minotaurlike creature. If these early missions are any indication, the gameplay should be light and straightforward, offering a simple collection of classic role-playing journey quests. It's hard to see how the story will branch off from this point, but early indications suggest a game light on dialogue and exposition, but heavy on action.

Final Fantasy Crystal Chronicles: Echoes of Time is due for release later this month. It'll hit store shelves on March 23, and you can expect to see our review right around then. 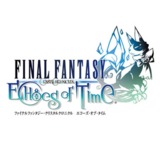