The interview doesn't just look at Final Fantasy 3, but the earliest days of Square as a company.

While everyone is preoccupied with the nostalgia of the Final Fantasy 7 remake, an even earlier Final Fantasy is celebrating its 30th birthday. Released on April 27, 1990, Final Fantasy 3 introduced the job-change system, and pushed the limits of what a game could do in those days.

Square Enix has released a new interview with game creator Hiromichi Tanaka about the development of Final Fantasy 3. With two Final Fantasy games already under their belt, and game carts increasing in storage space, the team wanted to push the envelope with Final Fantasy 3. "We had learned how to make good use of the NES, plus carts had gotten to megarom data sizes that were about double that of FFII," Hiromichi Tanaka said. "So we were making FFIII with the mentality of pushing the amount of data that can be packed into these carts to its utmost limits."

Tanaka also explains how they went from the story-heavy FF2 to the mechanics-dominated FF3. "That’s because Mr. [Akitoshi] Kawazu wasn’t involved," he explained. "When Mr. Kawazu creates stories, they have a certain distinctive characteristic to them, so his involvement often has a tendency for that game to be remembered as story-heavy."

While Square, now Square Enix, is now a huge company with thousands of employees, the company was much smaller and development not quite as organized as it is these days. Tanaka explains that his involvement extended to "essentially everything but the story" with Final Fantasy 3.

"With FFIII Mr. [Hironobu] Sakaguchi started writing the story, so I handled everything not related to that – battle, menus, system design, all of that," he said.

It was also the first game to be properly documented at Square, a process that's now considered core to the development process. "After making FFI and FFII we realized, 'Oh, there’s not any documentation left,'" he explained. "With FFIII, we decided to create an official project plan, organize all the materials in a binder and archive it properly."

Final Fantasy 3 was the first appearance of many features now iconic to the series, including Moogles, the summoning system, and even having the party present with the main character in the game. Hiromichi Tanaka touches on this and more in the full interview, which is worth a read for any fan of the classic Final Fantasy games. 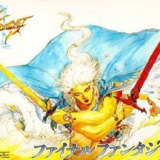