Two-level sample lets gamers head back to the Hyborean Age.

Today, TDK Mediactive released the final demo for its forthcoming third-person action adventure game, Conan. The demo is significantly more polished than the beta demo that was leaked in December 2003. It features two levels from the European edition of the game and is playable in German or English. Conan will be released for the PC and Xbox in Europe sometime in Q1 2004, with GameCube and PlayStation 2 iterations to follow. No exact American release date for the game is available at this time.

Developed by Slovakia-based Cauldron, Conan is based on the original fantasy fiction of author Robert E. Howard. (However, it will feature pieces of composer Basil Poledouris' score for the Arnold Schwarzenegger movie.) Details on the story are scant, but it will certainly concern the titular barbarian's adventures in the fantastical and prehistoric Hyborean Age. According to Cauldron, gameplay will be 70 percent swordplay-filled action--including numerous gladiatorial deathmatches--and 30 percent adventure and puzzle-solving. 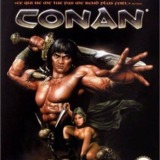