2010's Medal of Honor reboot was a good shooter, but it didn't set any new standards for the genre. After 18 months, can the sequel Warfighter fare any better?

The Game Developers Conference is fast becoming the place where EA unveils its marquee first-person shooter of the year. Last year, it was Battlefield 3 and a memorable 15-minute demo that gave us a first glimpse at not only the game, but also DICE's now-ubiquitous game engine Frostbite 2. Compared to Battlefield, Medal of Honor: Warfighter's unveiling this year didn't quite have the same impact, but thankfully for shooter fans, it did throw up some hints as to how it could advance the genre.

Like the first Medal of Honor, you will play as Tier 1 operatives; the difference is that this time, they will be from around the world rather than just the US. One common global terror threat will bring many different countries and forces together and, in the process, a multinational theme to the game. The other key word is "authenticity," as the team has once again worked with actual Tier 1 operatives to ensure that all the missions in the game are based on real-world events.

The story takes place directly after the last Medal of Honor, with Preacher returning in a central role. Richard Farrelly, the game's creative director, promises that the game will offer a glimpse into the personal lives of these Tier 1 operatives, including the impact their jobs have on their families. While we've yet to see how this will pan out, it sounds like a recognition of the success of such films as Hurt Locker, which pack more of an emotional punch than standard action fare.

Our demo was based on a mission in the Philippines, with the US special forces teaming up with their Philippine counterparts to take on local terrorists. The mission started in a large, open building that had been flooded with water. The section was exactly what you'd expect from a modern big-budget first person shooter: intense firefights punctuated by even more intense high-impact moments, such as explosions that tear through parts of a building. One of the more interesting mechanics was door breaching: you have the option of opening doors either by kicking them, using C4, or first tossing in a flash grenade. We saw how hostages were saved using the flashbang, with the now-obligatory slow-motion breaching sequence allowing you to pick off the dazed terrorists and save the hostages.

The demo then continued onto water, as we climbed aboard a jet boat and mounted the turret to fend off more terrorists that were situated on the roofs of houses. It was another bombastic action set piece that showed off Frostbite 2's destruction technology, particularly when one building collapsed and caused big, disruptive waves. The demo ended with the two boats being picked up by helicopter, with the operatives hooking them on as they flew off heroically into the distance.

Of course, multiplayer will be Warfighter's primary selling point for many, and Goodrich had some interesting revelations about this section of the game. He claims that they're taking a page out of the FIFA book by appealing to people's sense of national pride. There will be 12 international Tier 1 operatives from 10 countries, including the US, UK, Germany, Australia, and Poland. Goodrich expects that players will want to represent their country in the game's "Blue on Blue" mode, which he says is essentially good guys versus good guys. The early trailers for the game focus on the almost superhuman abilities of Tier 1 operatives, so when Goodrich says that it will settle similar schoolyard arguments as to who would win in a fight between Batman and Superman, it doesn't actually sound that far fetched.

What we saw of Medal of Honor: Warfighter certainly doesn't break the mold of the military shooter, but some of the developer's aims look to be fairly lofty. The game's release date has already been tied down for October 23 worldwide, with the now-standard Limited Edition available across the Xbox 360, PlayStation 3, and PC. 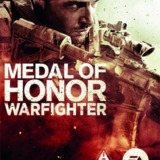