SouthPeak Interactive has dropped the S from Fighters and Fighter Destiny 2 is making its way to the Nintendo 64. 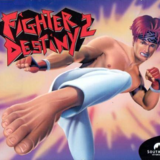