Fight Club author Chuck Palahniuk says that China's recent change to the ending of the movie adaptation is actually closer to the final moments of his book.

Speaking to TMZ, Palahniuk claimed that he's actually fine with the change. "The irony is that the way the Chinese have changed it is they’ve aligned the ending almost exactly with the ending of the book, as opposed to Fincher’s ending, which was the more spectacular visual ending," he said. "So, in a way, the Chinese brought the movie back to the book a little bit."

The ending of Palahniuk's novel saw the main character--known only as "the narrator"-- work alongside his anarchic team Project Mayhem to set off homemade bombs in an attempt to topple a nearby skyscraper. When his all-controlling alter ego, Tyler Durden, suddenly disappears from his mind, the narrator waits to be killed by the explosion, only to find that the bombs have malfunctioned. After trying to shoot himself with a gun, he awakes in a mental hospital.

David Fincher, who directed the 1999 cult classic film, took the ending in a different direction. The narrator (Edward Norton) shoots himself in the mouth to kill off Tyler (Brad Pitt) in the climax before watching multiple bombs explode around the city, effectively destroying the global economy in the process.

Chinese streaming platform Tencent Video's recent edit of the film reverted to an ending similar to that of Palahniuk's original vision, cutting the film off right before its final moments with text that states, "The police rapidly figured out the whole plan and arrested all criminals, successfully preventing the bomb from exploding. After the trial, Tyler was sent to [a] lunatic asylum receiving psychological treatment. He was discharged from the hospital in 2012."

Palahniuk is actually quite amused by American displeasure with the change. "What I find really interesting is that my books are heavily banned throughout the U.S.," he said. "The Texas prison system refuses to carry my books in their libraries. A lot of public schools and most private schools refuse to carry my books. But it’s only an issue once China changes the end of a movie? I’ve been putting up with book banning for a long time."

But both censorship and alterations aren't necessarily a rarity in the entertainment field, and that includes books. Palahniuk is no stranger to having his work changed, saying, "A lot of my overseas publishers have edited the novel so the novel ends the way the movie ends. So, I’ve been dealing with this kind of revision for like 25 years." 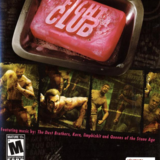