Follow the four-on-four footy action that offers a dash of urban style as we hit the pavement with FIFA Street.

The first installment in EA Sports Big's "street" series, NBA Street, seemed like a natural. After all, there's a vibrant street basketball scene in cities throughout the US, where flashy players and slick moves are as big a part of the game as the final score. Street basketball begged for a video game translation. The two NFL Street games, on the other hand, seemed a bit forced, as if they were shoehorning the NFL into the showy style of the games. You might think the same could be said about soccer, a sport that has a staid reputation here in America. As the most popular sport in the world, however, soccer is admired whether played on or off the pitch. EA Sports Big's latest effort, FIFA Street, looks to combine the international appeal of the beautiful sport with the hip urban vibe of its Street series. We recently hit the pavement with FIFA Street to see how it was progressing toward its late February release.

As in other Street series titles, the rules are thrown out the door in FIFA Street. Offsides penalties are impossible, tackling is encouraged, and showboating is required. The four-on-four format means you'll need to choose your squad carefully before entering a match. All player positions are accounted for in FIFA Street, from defender to midfielder to forward, and each player has different attributes for you to choose from. Defenders and midfielders, for example, are generally strong tacklers, while forwards naturally tend to favor speed and shot accuracy. You can mix and match your players as you see fit, but focus too much on one particular attribute and you'll give up capabilities elsewhere.

FIFA Street's main modes include quick game, friendly match (which, unlike the quick game mode, uses team ratings to differentiate between powerhouses like Brazil and England and mediocre squads like the US and Australia), rule the street, and star team option, where you build a four-man dream team of real-life footy all-stars from around the globe. Looking to unite Thierry Henry with David Beckham and Wayne Rooney? Now you can.

Most players will take directly to the rule-the-street mode, as this is where the game's real meat lies. Essentially a career mode, rule the street allows you to create a player and team from scratch so you can work your way up the ranks by playing a number of pickup and tournament games on the 10 global street venues found in the game, from New York City, to Amsterdam, to Rio de Janeiro. Creating a character is easy and intuitive, though doing so here is not as deep or involving as doing so in titles like Fight Night Round 2 or last year's Tiger Woods.

Once you've created your virtual soccer identity, you'll need to fill out the rest of your roster with a goalie, defenders, midfielders, and forwards from a number of preset players. Each available player has an overall numerical rating associated with him that's based on his combination of attributes, which include speed, tackling, shot power, and accuracy. Which players you choose to take to the field will affect your team's overall rating. In many of the early games found in FIFA Street's rule-the-street mode, you'll find yourself outmatched from a talent standpoint and will need to rely on your gameplay skills to prevail. Luckily, you'll be able to upgrade your team's roster after just a few wins.

There are several match types in the rule-the-street mode: "kick abouts," which are pickup games against rival teams; upgrade squad matches, where you play against an opponent to steal his star talent for your roster; and the actual rule-the-street games, which are tournament matches where you prove your championship worth at each location found in the game. Only by winning these tourneys can you unlock alternate venues. Each match win in this mode, however, will earn you credits, known as "skill bills," that you can use to upgrade the attributes of your created player, purchase entry into tournaments, or unlock chances at new upgrade squad matches. Wins will also earn you rep points, which gauge your progress through the mode. As your reputation increases, so too will the level of talent you face, always ensuring you have a challenge on your hands. Finally, as you make your way through the game, you'll also unlock new items for your kit, such as hats, sunglasses, jerseys, shorts, and more, all of which can be used to customize any player on your squad.

It's better to kick good than to feel good

On the pitch, such as it is, gameplay in FIFA Street is dependent on style as much as teamwork. Tricks are the name of the game, and much like in NBA Street V3, you can perform fancy ball maneuvers by moving the right analog stick while in possession of the ball. When used correctly, these "beats," as they're known, let you slide past defenders by kicking the ball between their legs (or over their heads or around them) or juking them out of their set positions, letting you continue downfield. Despite being scripted, the moves themselves are generally pretty cool. In fact, we heard several "oohs" and "aahs" from people watching us play the game when pulling off these slick maneuvers. On the flip side, the artificially intelligent opponents will often pull the same tricks while you defend, so you'll watch in frustration as you momentarily lose control of your player while the "beat" animation players outmaneuver you. It feels disjointed at first, this loss of player control, but you'll soon learn to compensate by quickly switching control to another player and manually bringing him in to help out.

In addition to making your opponents look silly, tricks are used to fill up a gamebreaker meter, which should be a familiar sight to anyone who's ever played a Street series game before. Combos can be strung together in the same style as NBA Street V3 for bonus gamebreaker points. Fill up the meter and you'll be rewarded with a gamebreaker kick, which is essentially a slow-motion animation of a dramatic kick that more often than not results in an instant goal. Interestingly, though, gamebreaker kicks are not automatic goals; if you take a bad angle on a shot or attempt a gamebreaker kick with a defender directly in front of you, your juiced-up shot will likely be deflected.

The controls in FIFA Street are easy to learn. On offense, three of the four face buttons control passing (high and low) and shooting, while the fourth face button kicks off a random trick. The left analog stick moves your player and aims your shot, while the right stick is used in tandem with a shoulder button to execute tricks. Shot aiming is an easy affair thanks to a goal graphic that is superimposed on the screen as you enter the offensive zone. A red ball indicates where your shot will go, and you can adjust your aim on the fly before shooting by using the left analog stick. You can taunt your opponent using the directional pad, in addition to racking up gamebreaker points while you're at it. On defense, the four face buttons are used for normal and slide tackles, interceptions, and switching player control.

FIFA Street has a nice visual style that marries realistic-looking player models with some fun passing and shot animations, thus creating a sort of exaggerated realism. You'll recognize Brazil's Rivaldo the second you see him, while you'll simultaneously marvel at his stylish and effective beat tricks. Goal replays are on by default, and they're as stylized as you might expect from the Street series. The replays could probably benefit from some camera tweaking, however, as some of the angles don't always present the best view of the action.

One of the more attractive aspects of FIFA Street is its soundtrack, which presents itself as a world-beat variation of EA Trax that goes a step beyond the mundane hip-hop and metal sounds found in other Street games (and, indeed, found in all of EA Sports' titles). FIFA Street's more eclectic mix of tunes fits the worldly tone of the game, so you're just as likely to hear a funky drum 'n' bass breakdown when playing in Marseille or New York City as you are a lively samba beat when taking to the field in Rio. There's also a wisecracking bloke who tends to interject comments throughout your match, but he's not nearly as prevalent (or as annoying) as DJ Bobbito Garcia from the last two NBA Street games.

Despite sometimes-awkward player controls, FIFA Street seems to be coming along well. The game benefits from its slightly more cosmopolitan style and slightly less in-your-face approach, while it still keeps that same hip style the Street franchise has come to be known for. We'll have a full review of FIFA Street when it kicks its way to store shelves later this month. 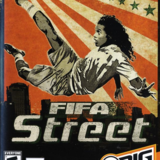