EA announces that six versions of its latest soccer game are now in stores across North America.

Electronic Arts has today announced the North American release of FIFA Soccer 2004. Developed by EA Canada, the game is available on the PC, PlayStation, Game Boy Advance, and all three current console platforms. An N-Gage version of the game is also in development and is currently scheduled for release toward the end of this year.

FIFA Soccer 2004 features 18 leagues from around the world, making for a total of 450 teams and no fewer than 15,000 players. The game was released in Europe a couple of weeks ago and is currently topping sales charts--ahead of its main rival, Konami's Pro Evolution Soccer 3. For more information on FIFA Soccer 2004, check out our previous coverage of the game. 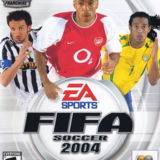