In May, Electronic Arts revealed that Ronaldinho would be the international cover athlete for FIFA 08. The publisher also announced that in soccer-mad Europe, many territories would see their own local stars join the Brazilian-born FC Barcelona striker on the game's box. Real Madrid's Sergio Ramos would be FIFA 08's cover player in Spain, Miroslav Klose in Germany, Andreas Ivanschitz in Austria, Tranquillo Barnetta in Switzerland, and Florent Malouda and Franck Ribéry in France.

Though the British cover athlete for the game is yet to be announced, today EA announced who will grace the North American packaging of FIFA 08 when it arrives later this year. New York Red Bulls striker Josmer "Jozy" Altidore and Mexican-born Club América goalie Guillermo Ochoa will flank Ronaldinho on the game's cover in all territories north of the Panama Canal. The move makes the 17-year-old Altidore the second-youngest athlete ever to appear an EA Sports game cover, after the then-16-year-old DC United midfielder Freddy Adu was chosen to be on FIFA 06's box.

In other sports game news, Sony Computer Entertainment America has selected Amare Stoudemire as the cover athlete for NBA 08. It will be the second time the Phoenix Suns power forward--who also participated in the 2006 All-Star Game and 2004 Athens Olympics--has been on the cover of an SCEA basketball sim, after NBA 06 two years ago. NBA 08 will ship for the PlayStation 2, PlayStation 3, and PlayStation Portable in October. 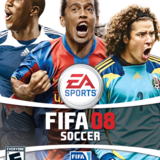