Freeze Interactive aim to freshen up the RTS and FPS genres with a game that's either, or both.

Freeze Interactive is calling its new title Field Ops a 'real-time strategy shooter'. In other words, it combines the real-time strategy and first-person-shooter genres in the kind of blend you might expect from mixing Battlefield 2 with Command & Conquer.

To begin with it sounds like a slightly awkward proposition, but according to Olivier Goulon from Freeze the aim in creating the game wasn't to mix genres for the sake of it. Instead the motivation came from an attempt to give gamers the best simulation of a real-life battle environment. The way to do that, they thought, was to put the player in the shoes of not just the commander, or not only the soldier, but to allow them to play as both at the same time.

From what we've seen so far the results are promising. The key to succeeding when blending two contrasting play styles is to make sure that both are fairly represented. FPS players will know that speed and accuracy are their big advantages, while the RTS player would expect greater scope, and control of more units, to give them an edge. In Field Ops, both examples are true, and it's up to the player to decide which mode is best for any given situation. It's possible to complete the game using only one of the modes, but in certain circumstances it would be extremely difficult. Corridor shoot-outs would be far more efficient in FPS mode, for example, given the need for more close-up visibility.

In order to compensate for the generally slower pace at which RTS games are played, Freeze has implemented a couple of interesting tools for that mode which help to make things a little easier. The first is a 'snap-to-cover' function, which allows you to select a group of units and send them to hide behind cover. Depending on the size of the hiding place there will only be room for a certain number of soldiers, but the cursor will snap to appropriate locations, and if there's not enough room the remaining troops will seek cover nearby.

The second tool is an 'overwatch' mode, which will focus a group of your troops' attention on a specific area. They'll continue to cover this area until told otherwise, and any enemies appearing in their targeted location will be greeted with a hail of lead. This makes it easier for RTS-mode players to move troops from cover to cover, whilst remaining slightly safer. In addition, Ghost Recon or Full Spectrum Warrior veterans will welcome the ability to assign commands in FPS mode to a smaller squad (or four or five soldiers) without having to switch to RTS mode.

The plot in Field Ops revolves around a US military outfit, fighting against terrorists in four locations around the world. To begin with you'll play in Cuba, before moving on to Ukraine, Afghanistan, and finally Manhattan, New York. Each location looks suitably different, and there are 16 single-player missions spread across them. With each of those missions estimated by Freeze to take around an hour to complete, that adds up to approximately 16 hours of gameplay.

There are extensive plans for the multiplayer side of the game, which should bump up playing time considerably. It will be possible for six players to play the game at once, with various arrangements of co-operative or versus play available. Something that Freeze is excited about is the possibility of bringing traditionally FPS or RTS players together in the same place, something which may not normally happen. There will be three multiplayer modes available--bomb run, conquer, and assassination--and these will be playable across 10 different maps.

Attention to detail in the game seems to be good, with a variety of vehicles and weapons faithfully recreated from their real-life counterparts. It's possible for players to jump into any vehicle they come across, be it civilian or military, including cars, buses, jeeps, tanks, and helicopters. They all handle differently and can be controlled in both game modes, although you'll see the action from the third person in FPS mode, a la Grand Theft Auto, rather than a first-person view. In addition you'll also be able to call in air strikes, although it won't be possible to control planes directly.

There are seven unit classes featured in the game, each with a unique ability. These include medic, sniper, engineer, technician, machine gunner, and demolition expert, and the abilities relate to their various areas of expertise. As you'd expect, a medic can heal people, a machine gunner can use heavy weapons, and so on. There will also be seven hero units spread throughout the game. These will be a lot more powerful than the standard soldiers and will feature additional unique abilities of their own. One example given to us was a Jack Bauer-type agent, who can infiltrate enemy defences and laser-designate targets.

Visually the game stands up against most FPS games currently available, and the team have developed a rag-doll physics engine which allows for quite a degree of environmental manipulation. In one example we saw, a sniper was scoping out an area in which a number of terrorists were hiding. On closer inspection of some nearby barrels (which were up a gentle slope from the terrorists) we saw that one contained hazardous materials. By taking a shot at one of the barrels, they were all dislodged, and started rolling down the slope. Another well-aimed shot blew the hazardous barrel up in good time to take out two of the opposing enemies.

In fact, while the barrels incident was a nice touch, most of the environments are destructible. Vehicles, fences, walls, and even small buildings can all be destroyed or disfigured in some way, and this opens up new strategic options within the game. For instance, it's possible to blow up some walls to open up new routes, or knock down stacks of crates or barrels to create new places in which to seek cover. RTS fans should have some fun with the possibilities, especially in multiplayer, where it's conceivable that several players will be trying to manipulate the same areas of the map for their own advantage at once.

Spending some time playing the game on one of the levels set in Ukraine gave us some idea of how the mode switching works. Whereas the controls in RTS mode are dominated by the traditional right-click method, and the FPS mode by the usual keyboard and mouse combination, transferring between the two is a simple press of the Tab key. Moving from one mode to the other is virtually instantaneous, and after doing it several times it seems an entirely logical process. Field Ops is currently undergoing testing in readiness for a Q1 2007 release worldwide, and we'll have more on the game as it becomes available. 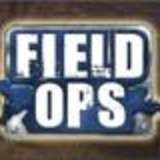