This is actually real.

Fidget Spinner Simulator, an absurd $1 Steam game that lets you virtually experience the joys of fidget spinners, has added a new piece of DLC that is 30 times more expensive than the game itself.

The "Premium Member DLC," as it's called unlocks the "Premium Member" achievement and gives you a "Premium Gold Plated" fidget spinner and a gold plated vape pen. Here's what those items look like in the game (via NeoGAF):

In the comments of the DLC announcement post, a developer responded to criticism of the content, saying, "Why? It's easy not to buy the DLC right? Nobody is forcing anybody." A emoticon of President Donald Trump's face was attached to the comment.

The Premium Member DLC is listed at $30 after a price drop from $50. In announcing the DLC, the developer said, "Ayyyy lmao," with a pepe the frog emoticon.

In Fidget Spinner Simulator, you use the arrow keys or W A S D to move around on a hoverboard. Pressing the Space bar activates/deactivates the fidget spinner.

Fidget Spinner Simulator was released at the end of July. It has a "Mostly Positive" critical reception on Steam after more than 240 reviews. For more, head to the game's Steam page here. 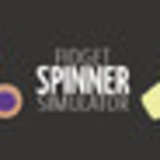