What's notable about the game, besides the pro-skater affiliations, is that developers motion-captured the skaters and are focusing on using their signature moves and, moreover, their personal styles. We asked Steamer how she feels about being included in the game and what she believes she'll bring to the title, besides her signature moves.

"I was excited when I heard that I was going to be in the game. I was on tour, and my team manager, Billy, got a hold of me and told me about it," said Steamer, who's currently sponsored by Toy Machine, Etnies, TSA, and World Market. What does she bring that's unique? It's simple: "I am the only girl in the game."

Steamer has played early builds of the game and thinks it looks quite good. She hasn't gone so far in her involvement as to be motion-captured yet, but she said it feels good to know that the game will have more diversity with her included. Steamer likes video games, too, which isn't always common in celebrity/athlete-game crossovers. "I like games like Jeopardy and Wheel of Fortune. There is a game called Intelligent Qube that is also fun," said Steamer.

We asked Elissa what she wants gamers who may not be familiar with her pro skating career to know about her. "That I love skateboarding. And every time that I go skating I accomplish something. Whether it's landing a new trick or just having a good time, I feel like I'm accomplishing something," said Steamer. We have a few exclusive shots of Elissa in the game that you should take a look at.

Activision's Tony Hawk's Pro Skater will be available September 29 for the PlayStation, with a Nintendo 64 version coming in December. 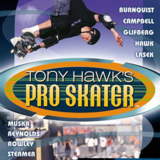