The prequel to this year's hit adventure Fear Effect will delve further into the backgrounds of Hana, Royce, and Deke and introduce the mysterious Rain Qin, Hana's former partner.

Fear Effect sent chills up many a gamer's spine, with its eerie, adult plot, bizarre, progressive visual design, and often-unforgiving gameplay. Despite its off-kilter elements, the critical community received the title very well. It is apparent that the title's scope was not lost on the public. Hence, the need for a sequel, of sorts. Or, rather, a prequel.

Fear Effect - Retro Helix takes place several years before the events of the first title. Hana, Royce, and Deke are independently hired, under sketchy circumstances, to retrieve three disparate items, presumably component parts of a single artifact. As we had with the original, we can expect Fear Effect - Retro Helix's story to go off the deep end, at some point. While the items retrieved by the group are, ostensibly, the means to cure a genetic malady afflicting the world, they in fact serve a dual purpose - as a weapon against a power of unfathomable grandeur that's bent on humanity's destruction.

Much of the action takes place in the alternate-reality Hong Kong in which the original Fear Effect was set, though a few other locales are introduced: Hell's Kitchen in New York City and the Walled City of Xi'an, to name a couple. Also introduced is the beautiful (and deadly) Rain Qin, Hana Tsu-Vachel's partner in crime, and love interest.

Fear Effect - Retro Helix will have eight stages, composed of more than 800 unique camera perspectives. Several of the original game's warts are supposedly being addressed, the most obvious of which is the abysmal load times that players were forced to endure after the death sequences. The real-time interface is reportedly being spruced up, and Kronos is attempting to make the prequel more replayable - enemies are said to spawn in different locations each time through, and you can unlock a host of secret features by finishing the game. Also, the 60-plus enemies will supposedly enjoy unique AI routines.

Fear Effect - Retro Helix will be on show at E3. You can definitely expect to hear much more about this right here, so stay tuned! 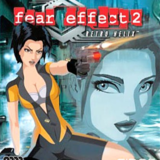