Fear Effect movie in the works

Eidos announces that it has optioned the movie and TV rights to its Fear Effect action game series to Boll KG.

Eidos today announced that it has optioned the movie and television rights to its Fear Effect action game series to producer and director Uwe Boll and his production company, Boll KG. Fear Effect is the third Eidos game to be optioned for a movie, following Tomb Raider and Deus Ex, which was optioned to Columbia Pictures and producer Laura Zisken back in 2002.

"We are excited to continue our success of extending our original IP to film," said Paul Baldwin, vice president of marketing at Eidos. "Tomb Raider was highly successful, as will be Deus Ex, and we look forward to Fear Effect continuing this trend."

Uwe Boll was responsible for the Sega-inspired House of the Dead movie released last year and for Alone in the Dark, which is based on the Atari game of the same name and scheduled for release this summer. Currently, Boll, who spoke to GameSpot just yesterday, is working on movie adaptations of both Majesco's BloodRayne and Microsoft's Dungeon Siege.

"Fear Effect is a fantastic game with a dark story," said Boll. "I want to create an action film in the vein of Charlie's Angels but portray its sexy heroines, Hana and Rain, in a much edgier fashion."

We'll bring you more information on the Fear Effect movie as soon as it becomes available. 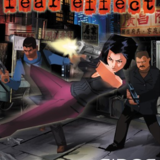