Farming Simulator 22 is off to the best start in the history of the series.

Giants Software has announced that its latest game, Farming Simulator 22, sold more than 1.5 million copies in its first week alone. This sets a new first-week sales record for the series.

The developer self-published Farming Simulator 22 across PC and console, and the company said this was helpful as it allowed the studio to "streamline the communication with international distributors and extend the network itself to ensure all objectives are met."

Giants Software CEO Christian Ammann said, "I'm so proud! Of the team and the prospering environment it thrives in. Being able to successfully build international structures to transfer an already huge series like Farming Simulator into a self-published brand with new impulses, is not to take for granted. The great collaboration with our partners ensured a fantastic launch."

The developer added that Farming Simulator 22's cross-play multiplayer support helped bring "more and more players all around the world together."

Farming Simulator 22 also briefly had more active players than Battlefield 2042, according to SteamDB.

Farming Simulator 22 is described as the "most extensive farming simulation to date." Some of the new features for this year's game include seasonal cycles and production chains to help virtual famers grow their agricultural businesses. A Year 1 Season Pass is available, and it comes with additional content for the game throughout its first year. 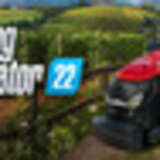