Farming Simulator returns for another year.

The next installment in the Farming Simulator series has been announced. Focus Home Interactive and developer Giants Software today revealed Farming Simulator 17, which is coming to PS4, Xbox One, and PC "at the end of 2016" (via IGN).

The game will launch simultaneously across all systems on that day, though a specific release date was not announced. Today's announcement didn't come with any details about the game itself, as that's being saved for an event to be held later this year.

"It's been a pleasure working with Focus throughout all these years," Giants Software VP Thomas Frey said in a statement. "This partnership is the water on the seed that made Farming Simulator grow into the global phenomenon it is today. Each time we release a new version together we reach more people, and we look forward to expanding this reach even further in the coming years."

One glorious-looking image from Farming Simulator 17 has been released, showcasing a tractor in a sunflower field with an epic sky in the background.

If it follows the formula of past Farming Simulator games, you can expect to manage and develop your own farm. Duties may include harvesting resources and taking care of animals, among other things.

It also appears that licensed farm equipment is making a comeback, as the image above shows a Massey Ferguson tractor. We'll have more details on Farming Simulator 17 as they're announced. 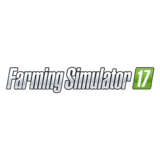