Ubisoft's action shooter pushed from September debut to December 4 in North America, November 29 in Europe, the Middle East, and Africa.

Far Cry 3 won't be out this September as previously planned. Ubisoft announced today that the first-person shooter has been delayed to December 4 in the United States. A release in Europe, the Middle East, and Africa (EMEA) is scheduled for November 29.

Ubisoft producer Dan Hay explained the company needs more time with Far Cry 3 before shipping it to retailers to make sure it delivers on quality.

"We're taking more time to create the best possible gameplay experience," he said. "Far Cry 3 is a huge offering and we want every element of this insane, action-packed adventure to be of the highest possible quality for the players."

[UPDATE] Following the publication of this story, a Ubisoft representative told GameSpot no decisions have yet been made regarding if the game's delay will change Ubisoft's plans for the Far Cry 3 beta.

"We are still doing our best to make that determination, but nothing is confirmed yet," reads the statement.

Far Cry 3 will cast players as Jason Brody, a man stranded on a strange tropical island similar to the setting of the first Far Cry. Gamers will head out into this "savage paradise" and "slash, sneak, and shoot" to survive in a world that has "lost all sense of morality."

Along with delaying Far Cry 3 today, Ubisoft announced release dates for upcoming games. Just Dance 4 will hit the Xbox 360, PlayStation 3, and Wii on October 9 in the United States and October 2 in EMEA. A Wii U version will arrive during the system's launch window this holiday season.

The publisher's guitar-focused music game Rocksmith, with new content that allows players to plug in a bass guitar, will be released for the first time in EMEA regions for the Xbox 360 and PS3 on September 27. A PC iteration will follow in these regions on October 18. All versions of the game will be available in the United States on October 17. Existing Rocksmith owners can purchase bass compatibility as downloadable content on September 4. 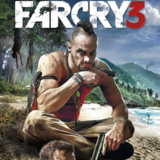