Far Cry 3: Blood Dragon Is Now Free on PC; Here's How to Get It

Ubisoft is giving away yet another PC game.

Right on schedule, Ubisoft today made Far Cry 3: Blood Dragon available for free on PC. The offer is part of Ubisoft's monthly free game promotion that celebrates the company's 30th anniversary, following its founding in 1986.

To get Blood Dragon, go to the Ubi30 webpage, click "Get the Game Now," and follow the instructions. You will need a Uplay account to claim the free game. It normally sells for $15 on PC and console.

Blood Dragon replaces the previous freebie, Beyond Good & Evil, which was free up until November 8. Other games that have been included in previous months include The Crew, Rayman Origins, and Splinter Cell.

December is the final month of the Ubi30 promotion. The month's free game hasn't been announced yet, but we'll report back with more information as it's announced. The Ubi30 campaign kicked off in June, when Prince of Persia: The Sands of Time was offered for free.

Blood Dragon received a score of 8.5/10 in GameSpot's review. Critic Kevin VanOrd said, "You don't have to love the decade of Rubik's Cubes and Pac-Man Fever to get a kick out of Blood Dragon. But if you do, then all the better: this action-packed shooter will strike all the right synth-pop power chords." 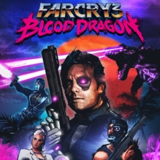