The video was removed after the Family Guy episode aired, though it has since been reinstated.

This past Sunday, a Family Guy episode titled "Run, Chris, Run" aired on Fox. The episode used footage of NES game Double Dribble, which was taken from a YouTube video. Shortly after the show aired, the video was taken down by Fox on copyright claims (via TorrentFreak). However, it has since been reinstated.

Family Guy used the footage as part of a joke, where Peter plays Double Dribble with his friend, Cleveland, and continually exploits a known glitch--if you shoot a three-pointer from the corner, it always goes in. The footage came from YouTube user Sw1tched's video. You can compare the Family Guy clip below with the original Double Dribble footage at the bottom of this article.

"This is an automatic shot my brothers and I found on the NES Double Dribble back in the '80s when it was released. I know others know this also, but as long as you release at the right point it is automatic. The half court shot I took at the end goes in 80% of the time, but I didn't want to keep recording... HAHA," Sw1tched wrote in the video's description.

As the video is now back up, it's likely that it wasn't taken down purposely by Fox and was instead removed because of YouTube's Content ID, which allows copyright holders to identify similar footage using an automated system and flag it for infringement.

Sw1tched acknowledged the takedown in a YouTube comment, making it seem like Fox did not ask permission to use their footage. We have contacted Fox for comment on the situation and will update this article as more information becomes available. 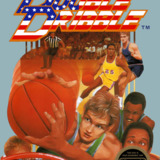