Released in October of last year, Fallout 3 was met with critical acclaim and commercial success, having shipped 4.7 million units worldwide in its first week. The game also performed well in the awards circuit, taking the top honours at the 2009 Game Developers Choice Awards last month during the Game Developers Conference. 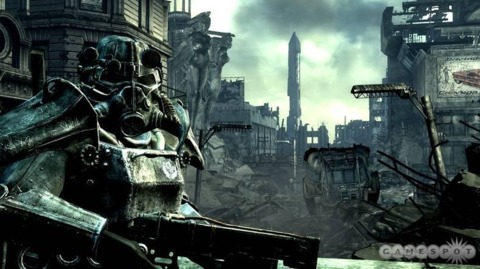 Given that performance, it comes as little surprise that Bethesda Softworks won't be dallying in bringing a follow-up to market. At an event in London today, the publisher announced that a new Fallout game will be coming to the Xbox 360, PS3, and PC in 2010. Titled Fallout: New Vegas, the game is being developed by Obsidian Entertainment, whose most recent works include Neverwinter Nights 2: Storm of Zehir and the upcoming Alpha Protocol. The studio was also at work on the third-person action title Aliens RPG before Sega canceled it earlier this year.

Obsidian Entertainment was founded in 2003 by Feargus Urquhart and others from Interplay's now-shuttered Black Isle Studios, developer of the original Fallout games. On hearing that the Fallout licence had fallen to Bethesda, Urquhart said: "Good Luck! That's probably somewhat horrible to say, but I think the team at Bethesda has their work cut out for them. This is mostly because there is almost nothing that they can do that will make the Fallout fans happy."

Fallout: New Vegas will be set in the Fallout universe but will not be a direct sequel to Fallout 3. However, it will stick to that game's RPG format, rather than branching out into real-time strategy territory as happened with 2001's Fallout Tactics: Brotherhood of Steel.

For more on Fallout 3, check out GameSpot's video review below.

There are 625 comments about this story
Load Comments (625)