An F-16 fighter jet costs approximately 12.8 million dollars. If you don't carry around that kind of bread, but still feel a strong desire to fly at the helm of one of those babies, check out the upcoming MicroProse title, Falcon 4.0. When Falcon 3.0 soared with flight-simulation fans after Spectrum released it back in 1991, it showed that the Falcon series was the simulator for air warfare fanatics. Now all eyes are on this new release, which promises to be a great improvement over its immensely popular predecessor. The game's developers, while trying to preserve a certain "fun factor", are going all out to make realism a priority in Falcon 4.0.

Falcon 4.0 is staged during a real-time war on the Korean Peninsula, where both sides are engaged in air and surface combat. Your F-16 is an up-to-date model F-16C Block 50/52, equipped with infrared-missiles and other anti-aircraft sundries. An incredibly detailed and multifaceted radar (with 10 different modes) aids you in detecting enemies on the ground or in the air during your sortie. All weapons systems, radar, and other controls will be current with the craft's actual flight model.

One of the most noteworthy qualities of Falcon 4.0 is its complex AI scheme. You have the option of acting as wing-commander, ordering your wingmen to perform specific tactical maneuvers - or you can assume the role of a wingman yourself, complying with any orders that your wing-commander may transmit to you via radio. At any point during your sortie, you will receive transmissions from AWACS (Airborne Warning and Control System) warning you of any enemy craft within your immediate proximity. (Incidentally, you'll have to be able to distinguish between Korean and Allied Forces planes lest you besiege the wrong guy). Another interesting AI feature is the continuous battle scenario. You're participating in a real-time war, and all air and ground parties act independently from your maneuvers. Throughout the game, you are continually notified with reports on how the war is progressing.

According its designers, Falcon 4.0 was developed primarily as a network game. Players can compete head-to-head or play cooperatively. In the cooperative mode, players can even give or receive orders to each other during a particular mission.

One of the most striking aspects of this game is its graphics. The land that you fly over is depicted with breathtakingly realistic texture maps. Using actual aerial photography from the region, the art designers have rendered the Korean landscape in great detail. All three-dimensional objects, such as aircraft and ground forces, will be texture-mapped as well.

This graphical intensity, (which Falcon 3.0 fell short on) combined with Falcon 4.0's new AI and network features, may make playing Falcon 4.0 the closest thing to having a set of missile-laden wings attached to the side of your computer workstation. If the game's producer Leon Rosenshein is right when he says that the playing experience is "...the closest you get to being in a real war," then players who are interested in the completely "engaging realism" of a flight-sim will hardly be disappointed. 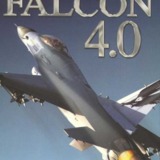