We match up the three baseball games to see which one does the best job of bringing MLB's best and brightest to life. Take a look at the faces of Major League Baseball in MLB 2K8, MLB 08, and The Bigs...and you make the call.

Although Major League Baseball's opening day is still a few weeks away, the video game baseball season is in full swing. Both MLB 2K8 and MLB 08: The Show have been released and reviewed, with Sony's MLB 08 coming out on top as the best all-around game. While MLB 08 was clearly the winner when it comes to gameplay, we wanted to find out which game did the best job recreating players' likenesses by taking 16 of the most recognizable faces in baseball and comparing them to their video game counterparts. Just for kicks we added in 2k's The Bigs, which was no slouch in the visuals department.

All screens were taken in 720p from the PlayStation 3 version of each game, using the best possible angle from first-inning instant replay. Player photos are from MLB 08. Note that some of the images have players looking in different directions. This is due to in-game ball tracking.

The results of our comparison are mixed. None of the players are quite up to the level of those in the NBA Live and NBA 2K series, and none of the games nailed every player's likeness. MLB 08's players were generally the most lifelike and the game did a great job with Derek Jeter and Ivan Rodriguez. 2K8 had a pretty nice looking C.C. Sabathia and probably the best Curt Schilling. Although that's not saying much since all three games struggled with Caucasian players. Asian players didn't fare much better, either. The Bigs' players were, of course, over-the-top, and while some of the players were way off, a few, such as A-Rod and Alfonso Soriano looked good.

To compare images, move your mouse over the captions below a player's name. For example, Ichiro's real photo is the default screenshot. His in-game photos can be seen by moving your mouse cursor over "MLB 2K8," "MLB 08," and "The Bigs" respectively.

What do you think? We've included a poll for each player, so you can vote for the game that nails each player's likeness the best!


Leave us a comment and let us know your thoughts on how MLB players appear in video games today. 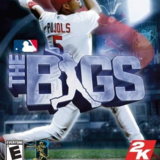