Warning: This editorial contains massive spoilers pertaining to the ending to Fable: The Journey.

I finally understand the Kinect's enormous potential. In the waning moments of Fable: The Journey, I needed to make a choice that I had been dreading since this game was first announced. Would I be able to accept my role as hero and step through the light with Theresa, knowing that doing so would doom my loyal horse to death? It's an incredibly heart-wrenching decision, one I fought against as hard as I could, but when the moment came, there was nothing I could do. The fate of the world hinged on my decision, so I had to turn my back on Seren, and live with the knowledge that I had dragged her along on a quest in which she could not possibly survive to see the outcome. 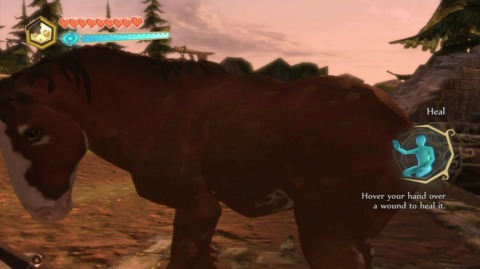 A horse in need is a horse indeed.

Before you understand how gut-wrenching this moment was, you need to know how this relationship formed during the course of our adventure. Every action in Fable: The Journey is controlled with the Kinect, and the hands-on approach to character building helped mold the feelings that developed along the way. Seren and Gabriel, the would-be hero whom you control, have been inseparable since young Gabriel was a toddler. Their bond had been cemented years ago, but my connection developed during the course of the game.

The most obvious bonding moments occurred whenever Seren suffered an injury. Hobbes and other enemies ambushed us while traveling along the road, and they have no sympathy for innocent animals such as Seren. So they planted explosive barrels and wooden barriers in the road to upset her gallop, and fired arrows down from the safety of their overheard perches. She whinnied with distress when these weapons made contact with her, but I pushed her onward, and she obediently complied with my wishes because she had absolute trust in me, even when her life was in danger.

After the escape, I searched for a quiet resting place along the road. Once stopped, I examined just how much punishment Seren had taken from those nasty creatures. Sometimes, she would rise on her hind legs, kicking her hooves wildly in the air, because an arrow shaft was lodged in her hide. By waving my arms and uttering soothing words, I eased her distress and then slowly removed the arrow from her side. Other times, I'd rest my hands on her open wounds to knit them tight. She would neigh affectionately after I fixed her up, clearly grateful for my efforts, and she might even nuzzle my arm. Seeing her respond to my actions was uplifting, so I did as much as I could at every rest stop. Sometimes, I would just brush the dirt from her hide or feed her an apple, and these simple actions helped strengthen the bond between us.

I usually don't buy into the idea that motion controls are more immersive, but they have been so smartly implemented in Fable: The Journey that I couldn't help being sucked into this dire situation.

My actions were no mere press of a button. As I reached my arms into the space in front of me, I realized I wasn't just mimicking the expected motion; I was doing so tenderly. I slowly closed my fist around the arrow, and gently drew it back, careful to hold it steady and not cause my virtual companion any undue harm. Just like that, I was much more invested in caring for Seren than I ever would have been with traditional controls. I usually don't buy into the idea that motion controls are more immersive, but they have been so smartly implemented in Fable: The Journey that I couldn't help being sucked into this dire situation.

Which brings me once more to the end of the adventure. Theresa told me that we'd have to leave Seren behind because only two living creatures could make it through the portal. Gabriel rightfully reacted with anger, saying that such a proposition was crazy, that she should be the one to stay behind, and I was nodding along with him. Through the many hours it had taken to reach this point, my attachment to Seren had only grown. I liked Theresa and wanted Albion to thrive, but I didn't care about them like I did my horse. So I was furious that I had to leave her behind, and appreciated just how well the cutscene mirrored my own thoughts.

Once you regain control, the power of the Kinect comes to light. Gabriel thinks that by killing the approaching army of monsters, he'll be able to save Seren. And I too assumed this to be true. So while enemies flooded the screen, I lashed out like never before. My arms swung with the fury of a man possessed, unleashing fireball after fireball as quickly as possible to stem the tide of attackers. Theresa yelled from offscreen, begging me to forget the enemies and just go through the portal, but I didn't care. I eliminated the enemies as quickly as I could, hoping against hope that I could somehow save Seren if I dispatched them all in record time.

When the final enemy fell, another cutscene played out, and I stared eagerly at the screen while rubbing my aching shoulder. But, alas, my efforts were for naught. Seren must still be left behind, and she would still be consumed by the corruption that was engulfing everything. I was angry.

Arms crossed indignantly across my chest, I scowled at Theresa as she begged me to grab her hand. We had sacrificed so much to reach this point. The growing evil had killed our friends, turned proud villages into piles of rubble, and threatened to engulf Albion in a black shroud. By accepting Theresa's hand, I would be able to stop this menace that had taken so much from me, but I had to lose my most loyal companion in the process. I stared at Theresa for a minute, hoping there was some way I could change my fate. But I couldn't. With laborious effort, I grabbed hold of her hand, leaving Seren behind.

I firmly admit that I'm a sucker for animals. But even being predisposed to such affections, I had never before felt an animal-related sacrifice as emotionally devastating as the one at the end of Fable: The Journey. It took a few years and many setbacks, but there's finally a Kinect game that demonstrates how removing the barrier of a controller can create an even more powerful emotional connection than previously possible.