F-Zero X has the solid racing chops you've come to expect from the series, but the visuals are awfully plain.

Generally speaking, every game in the F-Zero series offers the same sort of lightning-fast, futuristic racing that's easy to learn and tough to master. However, the games do tend to vary when it comes to such aspects as visual style and technical flair. In that regard, F-Zero X for the Nintendo 64 is the black sheep of the family.

The basic gameplay is still solid. In each of the various play modes and cup competitions, you're supposed to pick a futuristic hover sled then try to beat a field of 30 other racers on elevated courses that twist, turn, loop, or occasionally send you flying across large open expanses. Banking during turns and performing power slides will help you leap to the front of the pack. And, you can always trade some of your shield power for an extra burst of speed when you need it most. But smashing into the track boundary too often will deplete your shield and cost you the race, as will flying out of bounds. Conversely, nudging your opponents to their doom is a wonderful way to win.

Where F-Zero X comes up short is in its lack of visual moxie. The space-age vehicles look nice, but seemingly all of the N64's polygonal horsepower was used to bring them to life. You won't see sparks when you collide with another racer, while the track itself is just a series of blurry, solid-hue textures. For many courses, the surrounding city is a flat image that's been horribly stretched out to fill the background. Buildings and billboards, which are a frequent sight in F-Zero GX for the GameCube, are rarely seen. No one expects the N64 to produce the same visuals as the GameCube, but the visuals in F-Zero X are so low-key that even some of the cities in the original F-Zero on the Super Nintendo Entertainment System look livelier by comparison.

You can at least take solace in the fact that the game looks, sounds, and plays just like it would if you were playing it on an actual N64. The colors are rich and the frame rate is still locked in at a smooth 60 frames per second. Also, every note of the future-rock soundtrack comes through loud and clear. Regardless of whether you use a GameCube controller or the Classic Controller attachment to play the game, the analog response is quick and precise. You won't have any problem handling those quick hairpins that the expert courses tend to dish out. By synching up multiple controllers, you and your friends can also take advantage of the game's four-player split-screen capability.

If you already know what you're getting with F-Zero X, then--by all means--go download it from the Virtual Console shop and have fun. Otherwise, you may want to go out and get F-Zero GX for the GameCube instead. It'll run on your Wii, it only costs a couple of dollars more in most stores, and you'll end up with a futuristic racing game that's as much of a joy to watch as it is to play. 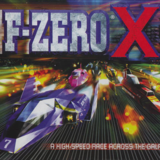