We check out the latest game to use Sony's EyeToy peripheral, an adventure game that ships with its very own sword.

We almost did a double take when we saw EyeToy Play: Hero at Sony's PlayStation Day in Europe. A PlayStation 2 game based on the company's USB camera peripheral, Hero is being aimed at younger players who want to play as a hero in their very own fairy tale. The game is a story-driven affair, a first for an EyeToy game, and it will also come with its very own custom peripheral, a green sword that you use to fight off the various monsters in the game. We picked up a prototype of the game at Sony's party and got a first play ahead of its release in October.

The full game will feature 30 levels, and we got to play two of them during our time with the game. The first was actually a rather tricky boss battle, with a huge ironclad monster that took swings at us with a sword. The idea was to block its attacks by moving the sword into the position indicated onscreen or ducking out of the way when it launched its special flame-sword attack. After you have deflected a few of its attacks with carefully timed blocks, the boss turns around to recover, during which time you can swing the sword and land some blows of your own.

The presentation of Hero looks like it took cues from fairy tales because the EyeToy camera is used to take pictures of you to present in a storybook. The book itself is just like you'd see in Shrek or a more classic tale, such as Snow White, and it's clear that seeing the story unfold will be the driving force behind the game. The second level we saw had us using our sword as a lantern, helping us to explore caves while slashing at enemies, such as bats and spiders. Every once in a while, a Royal guard comes looking for you and you have to hide the sword to put out the light.

The build we played of EyeToy Play: Hero was supposedly pre-alpha and needed some polish before its scheduled October release date. The sword itself is also in prototype phase, although we're assured it will feel very similar to the green foam one that we used during the demo. Two-player battles are also promised, although you will have to take turns to battle it out onscreen. It's an interesting concept, and while we'll have to wait to see if it has lasting appeal, it's sure to entice a few wannabe heroes when it lands later in the year. 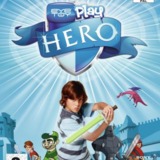