After nearly a year in development, Namco pulls the plug on its Dead to Rights spin-off.

As first reported on HomeLAN Fed, Namco Hometek has stopped development of Extreme Force: Grant City Anti-Crime, its Dead to Rights spin-off. According to a Namco spokesperson, "time constraints" were to blame for the cancellation, which came less than a month before the game's scheduled release. The spokesperson was quick to emphasize that the cancellation would in no way affect the development of Dead to Rights II: Hell to Pay, which is scheduled for a Q4 2004 release.

Extreme Force: Grant City Anti-Crime was being developed by Irvine, California-based Point of View, the studio behind Spawn: Armageddon and NFL Blitz 2003. However, when contacted by GameSpot, Mark Nausha, POV's vice president of product development said he "couldn't comment on the matter."

Although set before Dead to Rights, Extreme Force: GCAC shared its setting--the noir-ish metropolis of Grant City--and many of the same combat elements. The game took place before the original Dead to Rights, and followed an elite cop's attempts to stop a terrorist plot. The game was to feature a greater emphasis on stealth, and had been slated to be released for the GameCube, Xbox, PC, and PlayStation 2. 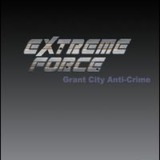