Exoprimal To Pit Mechs Against Dinosaurs In 2023

Capcom takes a page from Anthem by giving players some cool mechanized battle suits to take on huge hordes of dinosaurs pouring into cities.

It's not Dino Crisis, but Capcom has a new dinosaur-centric action game in the works for PlayStation players. Exoprimal puts you into a technologically advanced mechanized battle suit so you can handle fighting what seems like thousands of extra-dimensional dinosaurs as they literally pour out of the sky and into human cities. The publisher announced the new title during Sony's March State of Play livestream.

You can check out the Exoprimal trailer below, which gives a sense of its online multiplayer gameplay. You'll take on the role of an "exofighter," a specialized pilot using a mechanized suit to take on the dinosaur threat. The trailer shows off five different exosuits, each with a different combat role. Each exosuit is tasked with a different role on the team, with the idea that working together will allow you to overcome the greatest predators of the past. You can change exosuits at any time during a mission, which makes it possible to change tactics on the fly as the situation evolves.

The trailer concludes with a massive Tyrannosaurus Rex showing up and ripping through the team, so in addition to thousands of velociraptor-type dinosaurs swarming toward you and your friends, you'll likely also be facing down some deadly, towering prehistoric bosses as well. We also know the game takes place in 2040, and you'll follow the orders of an artificial intelligence called Leviathan in order to stave off humanity's extinction.

According to the game's website, expect to fight against dinosaurs as a cooperative team, while also facing other teams of human players. "Dino Survival, the main game mode, sees two teams of five players compete in a variety of PvE and PvP missions. Players will be transported to the scene of the latest dinosaur outbreak and follow Leviathan's guidance to complete objectives. The team that completes the mission first will emerge victorious. Whether players are engaging the other team directly, or fighting alongside them against a common enemy, the aim is to accomplish objectives as quickly as possible."

The official website also gives a sense of how teams will function. Exosuits fall into three combat roles: assault, tank, and support. Four of the suits featured in the trailer are detailed on the site. The orange Deadeye serves as your all-purpose assault suit, the blue Zephyr is a fast, tricky melee suit, while Roadblock acts as a shield-bearing tank, and Witchdoctor uses repairs and buffs to support the rest of the squad.

Exoprimal is headed to PlayStation 4, PlayStation 5, Xbox Series X|S, Xbox One, and PC in 2023. 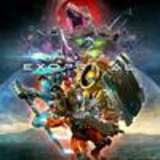