EA Sports is diving into the DLC ocean with verve these days. Just a few weeks ago, the publisher announced the Ultimate Team Mode, a downloadable expansion to last year&#39;s FIFA 09, and now they&#39;re getting set to release NCAA Basketball 09: March Madness Edition, a download-only, standalone... 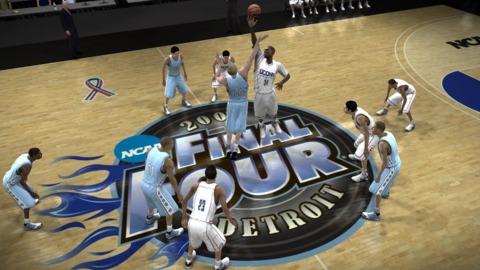 EA Sports is diving into the DLC ocean with verve these days. Just a few weeks ago, the publisher announced the Ultimate Team Mode, a downloadable expansion to last year's FIFA 09, and now they're getting set to release NCAA Basketball 09: March Madness Edition, a download-only, standalone game based around the NCAA Men's Basketball Tournament. Exclusively for the Xbox 360 and available for download on March 11, the game will let you play out the tourney using this year's tournament teams, and will include updated rosters and seedings.

The publisher has been experimenting with March Madness-themed DLC in its NCAA Basketball series for a couple years now. In both 2007 and 2008, EA released Selection Sunday Bracket Packs which included updated ratings and seedings and a full virtual bracket. According to EA reps, those who have previously purchased the Xbox 360 version of NCAA Basketball 09 will still be able to download updated ratings and the authentic 2009 tournament bracket for free-- this year's Selection Sunday roster update will be available on March 18.

With the March Madness edition of NCAA Basketball 09, it looks as though EA Sports is looking to tap into the revival of college hoops interest that comes each March, with a low-cost alternative to the full version of the game. To learn more about NCAA Basketball 09: March Madness Edition, we chatted with producer Connor Dougan.

GameSpot: What is the March Madness Edition of NCAA Basketball 09?

Connor Dougan: The March Madness Edition is a downloadable game exclusive to Xbox Live that lets you play your way through the NCAA Tournament with all 65 teams as it's occurring in real life. The game will be available initially (from March 11-17) with last year's Tournament teams and then we will update your tournament bracket just after Selection Sunday with this year's schools.

GS: How did it come about?

CD: There are a lot of people who are drawn to college basketball by the passion, excitement and drama that surrounds March Madness--but they may not own a college basketball game. This game is going to help these people get their college basketball fix. We are giving them an opportunity to experience the NCAA tournament at a lower cost. In these economic times it can be tough to shell out another $50 or $60 for a full packaged game--but the March Madness Edition is a lower cost option at 1200 Microsoft Points with all of the AI and gameplay features of the packaged game that came out in November.

GS: Will this include ratings changes for the teams?

CD: It sure will. We're currently massaging our team ratings right now. These updates will be released just after Selection Sunday and you can download them from the March Madness Edition Menu screens as soon as they become available.

GS: Can you give us an idea of some of the biggest ratings changes (either teams or players) since the original release?

GS: Are there are any gameplay changes that will come along with this feature?

CD: There aren't any new gameplay features added since the full game was released in November. Our goal for this product was to capture the attention of a different type of gamer (not our usual consumer who already has the packaged good) by offering something that's more cost effective and going directly to consumers at a time when the NCAA Tournament is on everyone's mind.

GS: Will this feature have any sort of online multiplayer support?

CD: The goal for the March Madness Edition was accessibility and affordability. This game will not have any online multiplayer support.

GS: How much will this feature cost and how did you decide on the price?

CD: The March Madness edition will be 1200 Microsoft points ($15.00). We're really excited about working with Microsoft to provide a sports simulation of this size for the first time ever on Xbox Live.

GS: Finally, do you have any early picks for the NCAA Tournament? 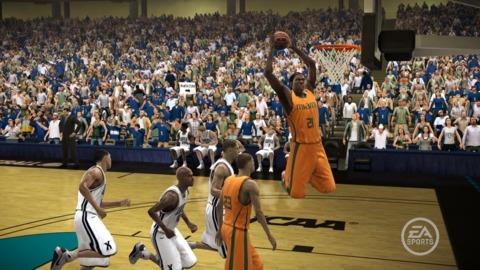 CD:I'm looking for Louisville and UConn to do some damage this year. They're the two best teams in the best conference in college basketball. They are well rounded teams that can score in transition and in the Halfcourt and they are both excellent defensively. And they have some pretty decent coaching.

GS: Thanks for your time, Connor.

Another interesting bit about this edition of NCAA Basketball 09: the included roster update will reflect recent high profile injuries (like Marquette's Dominic James and UConn's Jerome Dyson). While injured players will still be a member of their respective teams, they will not be in the rotation. In addition, EA reps told me that the March Madness Edition will not be updated as the tournament progresses... perhaps that's a feature they can add for next year's game?