We take a spin in the hottest new bots in this crazy, hectic, adrenaline-pumping arcade racer.

If you picked up a Wii at launch, you will most likely remember Excite Truck, one of the few games available on Nintendo's hot-selling console that was fun to play and wasn't called Twilight Princess or Wii Tennis. Excitebots keeps the frenetic pace of Excite Truck but adds quite a few new elements to make it more appealing than just a chaotic arcade racer. While we can't share with you all the juicy details just yet, we did enjoy what we experienced.

As the title suggests, you race as a bot. Bots are an assortment of mechanical insects, amphibians, and mammals that transform throughout the race, and each has its own specialty. Whether you're a bat or a frog, it changes the racing dynamics because your choice will determine whether you can glide or stand up on your hind legs and run. If this sounds weird, well, that's because it is. You'll race through various locales around the world, from the beautiful mountainous regions in Canada to the sun-kissed desert landscape in Egypt. The tracks are varied when it comes to the neighboring foliage, but from what we played, they didn't deviate too much in terms of the terrain. Whether it's a lush jungle or an open plain, they all have plenty of opportunities for you to launch high into the air so that you can pull off cool stunts.

The goal of each race is to collect as many stars as possible (coming in first helps too), and you do so by executing fancy tricks, running into other high-speed bots, or collecting special items along the way. By placing first you'll get a huge boost in stars, but you don't always need to win in order to get enough stars to move on to the next race. Depending on the track, you'll come across strange things like a giant soccer ball, which you can bump into the large net further down the road. By scoring a goal, you'll earn more stars, so you should always be on the lookout for darts, bowling pins, poles, and other random sports-related equipment that might be lying around. Another common obstacle is the red bar, which your bot will latch onto and swing on as though it were a gymnast about to dismount off a bar. Using the Wii Remote, you rotate it in sync with your bot, toward you, gradually increasing the speed so that once your meter fills on the side, your bot will be propelled off into the horizon. It's strange and it's random, but it's amusing and different, which is always welcome.

There are two control schemes for you to choose from. If you have a wheel, you can use it so that your Wii Remote is upright and on its side. The other way to play is by holding the Wii Remote horizontally and tilting it left and right to steer. It's easier with the wheel because it's more intuitive, and racing games are always more entertaining when they're closer to the real thing.

The only other mode we can talk about at this time is Poker Race, in which you try to collect the best poker hand by driving into cards on the track. This can get difficult depending on how well you know poker and how quickly you can decide what kind of hand you're going for. Each time you cash in a hand, you'll earn a certain number of stars. Your current hand is shown at the bottom of the screen and the upcoming line of five cards will be at the top, so you can at least get a heads-up and see what you're aiming for. The problem is, when you play with others, other bots will be gunning for the Ace too, so you'll need to do a bit of multitasking.

Racing is always better with live opponents, so the good news is that online play is available through Nintendo's Wi-Fi Connection, with up to six players and their transforming bots. The not-so-great news is that offline play is still limited to two players and you must first complete the training races before you can play with a friend.

Excitebots' visuals aren't a huge improvement over its predecessor, but the colors seem more vibrant this time around with a lot of variety in terms of the locations. Once your surroundings blur to give you that high-speed visual effect, the graphics don't matter as much anymore because the intense and fast-paced gameplay takes over. Be sure to check out the latest screens, and look for our full review when Excitebots: Trick Racing is released on April 20. 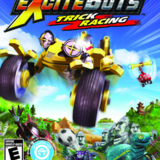