In this edition of our designer diaries, audio director Richard Joseph discusses the challenges in figuring out what an evil genius should sound like.

Sound designers always have a challenging task, but they usually come up with innovative ways to tackle their problems. For Evil Genius, the upcoming strategy game that lets you play as the evil genius seen in many a spy movie, the challenges were especially daunting. Evil Genius is mainly a base-building game in the Dungeon Keeper tradition. As an evil genius, you must develop a sophisticated underground base where you can research evil, new technologies and train evil minions in your never-ending attempt to try to take over the world. So what does all this sound like? In this edition of our designer diaries, audio director Richard Joseph explains some of the challenges he and his team faced and how they came through in the end. And be sure to check the downloads section of the Evil Genius gamespace for some music from the game.

Hello from the Evil Genius audio team. Making a soundtrack for a game based on the bad guys in Bond films sounds like a dream come true, but unlike a movie that has a beginning and an end--and only lasts a couple of hours--we're dealing with something that could go on forever. It has multiple, concurrent scenarios and a variety of viewing positions. More like a nightmare? Perhaps.

The music turned out to be more challenging than we initially thought. For example, it would seem obvious to play fast-paced music while focusing on some fighting. But what if the player watches the fight for a just a second or two and moves off to something else? You can't have music continually chopping and changing. Composer James Hannigan decided that rather than cluttering the game with music that attempted to keep up with the action, we should simply use a slow-paced, ambient "superspy-style" track that lurks in the background. You get the twang of a guitar, a run of plucked violins, or a moody vibraphone chord keeping everything in cool perspective even in the most unlikely of circumstances, like when a tourist runs through the mess hall in a blind, screaming panic while the evil genius's minions quietly tuck into their lunches. Certain important events, like someone infiltrating the base or stealing an object, will trigger a musical string that interrupts the ambient track, briefly lifting the tempo. Please bear in mind that we are being very selective with how this works, though.

For the sound effects, we knew we had it fairly easy. Stereotypes from movies, like beeping machines, echoey announcements, and sirens, could easily be incorporated into Evil Genius. But for dialogue, it's a different matter altogether. In movies, you never hear minions talking. They simply go about their business, oblivious to the fact that at some point they'll be shot and will fall over a railing, or they'll get hurled into the air in an almighty explosion. In Evil Genius, the minions are stars--and they all have speaking parts! Sound editor Malin Arvidsson has created somewhere around 40 different character voices for the various minions, henchmen, and agents. They all speak a sims-like gibberish. They also come from all parts of the world. So imagine Indian, South American, or Japanese gibberish! There's "real" language in there too. German tourists speak German to one another, and we use universally understood phrases like, "How are you doing?" It doesn't matter that the rest is gibberish, because the game doesn't depend on knowing what they're saying. What you do need to understand are the public address announcements in the game and the tutorial narrator. These parts are spoken in localized, real languages.

At first we had characters making all sorts of wacky noises, but we soon realized that it worked best if they sounded natural while going about their tasks or having conversations with one another. This also applied to vehicles and weaponry. Rifles have to sound as though they really do mean serious business. But for the rest of the sound... Interrogating someone with a spoof of a controversial recording artist, researching a new device in a greenhouse full of evil animated plants, or being probed by a '70s supercomputer can only work if the creators of the noises "live the part." It's not unusual to see Malin wandering through the development area with a bowl of soggy cornflakes or with a wet face from making bubbling noises. Then she'll be off recording, frying, and eating eggs in her flat for use in the Evil Genius mess hall, or she'll be filling a bath full of water and throwing wet towels on the bathroom floor for the piranha tank. Malin's attention to detail went a little further than what was expected--and indeed went beyond the terms of her contract--when she timed the extraction of her wisdom teeth to coincide with the recording of some female voice effects. "I needed a different accent for one of the characters," she said in obvious pain. Although Malin did take some recording equipment to the hospital, sadly she was not permitted to capture the sound of her teeth being pulled.

Recording live sound is, in fact, one of the most exciting parts of the job. I was out recording frogs in the south of France in the dead of night, and suddenly there was a bloodcurdling scream from the forest! I'm not sure if it was a fox or perhaps a wild boar being "prepared" for a local restaurant, but whatever hapless creature it was can now be heard somewhere on the jungle island in Evil Genius.

Our sound studios are situated right at the edge of the Evil Genius development area, and occasionally, the otherwise excellent soundproofing simply doesn't cope when the Evil Genius team members have eaten their ways through a couple of tins of sweeties and there's a sugar-fueled riot going on inside. We recently measured a sound level of 64dB of rioting! Sometimes it actually works quite well to include the muffled shouts among the game sounds. But it's not just the Evil Team unwittlingly providing sounds effects. At one point, I got so angry with the noise of a machine drilling on the floor below that I recorded it and used it for one of the game's interrogation devices.

Audio programmer Andy Mucho has to cope with far more than simply dealing with routine sound issues, like Malin submitting yet another thousand animation noises or my constant requests for features and changes. He has to sit among the Evil Genius development team, and according to Andy, "They make my life hell all day long. I'm trying to listen for artifacts in the sound, and even though I'm wearing headphones, all I can hear are designers talking about chocolate." But even given the extreme working conditions that Andy has to suffer, he has still managed to come up with a truly amazing 7.1 surround system that's capable of playing an enormous number of sounds at once. If you want to experience the full force of this, go out into the jungle during a thunderstorm! On hyperthreaded machines, this equates to the most important 128 sounds--out of several thousand--playing at once. On dual-processor machines, this creeps up to as many as 256 sounds. This is only limited by the draconian CPU budgets the sound department gets in this day of multigigaflop machines, but there are apparently better things to waste the CPU's enormous power on. Perhaps one day we can have 25 percent of the CPU for sound alone, and with that, 1,000-plus sounds all playing simultaneously! We can but dream.

Andy reckons that there are about 14 hours of audio in Evil Genius so far. He is threatening to "string it all together and put it up on the intranet" to force everyone to listen to the whole lot.

Perhaps Andy does have the makings of an Evil Genius after all... 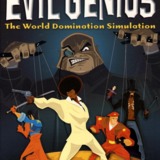