Ever Want to Play as a 2-Year-Old Tiger Woods?

The latest entry in EA's golf series gives you the opportunity to live the life of Eldrick Woods.

As a person who likes a little sports history in video games, I wholeheartedly enjoy the inclusion of a mode that focuses on the incarnation of a sport from years ago, and the latest game to give players a taste of history is the upcoming Tiger Woods PGA Tour 13. Rather than experience the great golfing moments of tournaments past, you are given the opportunity to play as Tiger Woods and relive his greatest moments throughout his life--minus that whole messy divorce thing--in Tiger's Legacy mode.

Video games omit the past few years of his career for obvious reasons, so you begin the mode controlling Tiger at 2 years old and his famous appearance on The Mike Douglas Show. Starting off, the objectives are pretty straightforward. As the toddler, you have to complete fairly simple tasks, such as sinking a short distance putt and hitting a few balls into a net. These were the exact things he did when he appeared on the program. Later on, you're transported to his childhood backyard where you experience training exercises designed by Tiger's father, Earl.

Tiger's Legacy is broken up into segments, and each focuses on particular moments in his career. Of course, the early stuff as a young Tiger should be fairly easy to accomplish, but the later challenges (like the 1997 Masters or the Tiger Grand Slam in 2000-01) take a lot of time and effort to complete.

On top of trying to re-create moments already accomplished in Tiger's career, the developers have even gone so far as to do a "what if" scenario and predict how Tiger's career will end, including his eventual overtaking of Jack Nicklaus' record of most major titles. Unfortunately, we didn't have the opportunity to see how old they've made Tiger look when he accomplishes this feat.

Additionally, it will be interesting to see just how much detail EA Tiburon puts into this mode. While the level of detail used in designing Tiger's childhood backyard was impressive, how much more detail has gone into every other aspect of his life? History lessons in other sports games have failed to really go into detail about the importance of the players and events. While you can easily find footage of Tiger Woods on YouTube, it would be nice if some added unlockable content with Tiger discussing those moments were included.

After completing the objectives for each phase in Tiger's life, you can access them for play in other modes, including online. It will be both cool and weird when gamers get to take a 2-year-old Tiger Woods and play courses like Augusta National a few weeks after the game is launched. 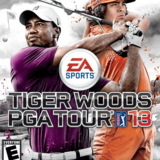