Snake's latest adventure on the PlayStation Portable will feature a wealth of extras for European gamers; bonuses include new characters, maps, missions.

Konami has announced that the European versions of Metal Gear Solid: Portable Ops, due in April, will ship with new game maps, characters, and missions.

Portable Ops takes place in 1970 and starts up just after the events of Metal Gear Solid 3: Snake Eater. Players take on the role of Snake (the Big Boss), who is putting together an elite unit of soldiers called Foxhound.

The game also makes use of the PSP's wireless mode, and by scanning for Wi-Fi access points, players can pick up unique recruitable characters generated by the access point's MAC address.

An additional 12 characters have been added to the European release, and the roster of the previously available characters has been slightly altered. Another bonus added for European gamers is the new "Boss Battle" mode, where players are rewarded for defeating the game's tougher enemies with new recruitable characters. 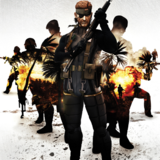