Bad Dudes, Burger Time, Caveman Ninja, "many others" to be included in Arcade Classics collection from Majesco.

The day of the American arcade may be gone, but a variety of compilations in recent years have ensured the titles they once housed aren't forgotten. While classic coin-op makers like Atari, Namco, Midway, and Taito have seen their works collected and rereleased for audiences new and old, not every arcade titan has been so fortunate.

One glaring omission from the compilation category will apparently be addressed soon, as the Entertainment Software Rating Board has posted a rating for a Majesco product called Data East Arcade Classics. According to the ratings board's summary, the arcade collection includes iconic hits like Bad Dudes vs. Dragon Ninja, Burger Time, and Caveman Ninja (perhaps better known by gamers in the 16-bit era as Joe & Mac), "and many others." The ESRB also lists the James Bond-inspired Secret Agent and Data East titles released for the Neo Geo system, the basketball game Street Slam and puzzler Magical Drop III.

Founded in April of 1976, Data East produced one of the first cartridge-based arcade game systems, 1980's Deco Cassette System. It pioneered the fighting genre with Karate Champ in 1984 and later was famously (but unsuccessfully) sued when its Fighters History was seen by Capcom as emulating Street Fighter II a little too closely. The company dropped out of sight by the end of the 1990s and declared bankruptcy in 2003.

As of press time, a Majesco representative had not returned GameSpot's request for confirmation and further details on the game. 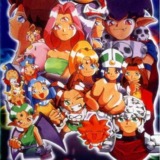