The Entertainment Software Ratings Board appears to have given Guitar Hero fans a late Christmas present. Sticking to the ratings board's oft-repeated practice of revealing titles before they are officially announced, the US-based body has posted a listing for "Guitar Hero: Modern Hits".

The listing comes as no surprise, given that Activision filed an application to trademark the title "Guitar Hero: Modern Hits" in October. However, its platform--the DS--was a bit of shock, given widespread speculation that the game would be an era-specific title a la 2007's Guitar Hero Encore: Rock the '80s. However, the news further underlines Activision's success on Nintendo's portable, which received two Guitar Hero games just this year: June's On Tour and November's On Tour Decades.

Like previous DS Guitar Hero games, Guitar Hero: Modern Hits will be rated E10+ (for Everyone 10 and older) by the ESRB. What is unclear about the game is whether or not it, like the two On Tour games, will come with a fret-button peripheral that connects to the DS via the handheld's Game Boy Advance slot. That slot is absent in the DSi, the camera-enabled third model of Nintendo's portable, which is due out in the US in the latter half of 2009. Requests for clarification sent to Activision had not been answered as of press time. 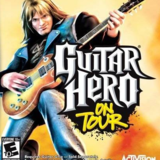