Hungarian development studio Philos Laboratories is currently working on Escape from Alcatraz, a real-time tactical strategy game that will be published by CDV Software later this year. We talked with the lead designer on the project, Antal Ruttmayer, about the game's unusual premise, its tactical mechanics, and what makes it different from other tactical strategy games. We also talked briefly about the history of Philos Laboratories.

GameSpot: First, tell us a little about Philos Laboratories. When was the studio founded, and who were the founders? What kind of game development experience did they have?

Antal Ruttmayer: Once upon a time, far, far away from the hotbed of gaming industry, a handful of desperate computer freaks made a historic decision, the founding of a high-tech laboratory in Hungary. Soon after the birth of Philos Labs, the founding fathers, including Zsolt Vamosi, our present CEO, envisioned Theocracy (1998), a historic real-time strategy game set in the era of the Aztec empire and the Spanish conquest. Theocracy became a success (2000), and there was no way to prevent the company from penetrating into the world of gaming for good. Philos grew bigger and bigger and started to develop more projects simultaneously. Our main concern is to come up with the lots of excellent titles in the near future. We collaborate with a number of reputed publishers in the gaming industry such as CDV and UbiSoft. Hopefully you will witness the fruits of the recent developments soon.

GS: What other games has the studio developed?

AR: Theocracy was released in March 2000 and became a top-selling game on Linux. Escape from Alcatraz is now in development. What's more, our new top-secret project will be officially revealed at E3.

GS: How many employees does the company currently have?

AR: At present, the Philos team has more than 80 members working on various projects, but we also have plenty of part-time contributors, which makes the company the biggest game developer in Hungary.

GS: How did the Alcatraz project start? What was the inspiration? Does the game have anything to do with the movie?

AR: After the release of Theocracy, we had a series of brainstorming sessions to figure out what kind of a game we should develop next. Interestingly enough, the idea of a bad protagonist was preferred by many of us. As we were trying to find the right context for the would-be game, one of the designers came up with the idea of a prison game. And on the spur of the moment, the ultimate idea was born: If we were ever to create this game, it should be based on the myth of Alcatraz, the most secure jail of all time. Then, we just got rid of the bad protagonist and the concept was there.

Inspiration? Well, the idea and the context were given. It was the goal of the game that had to be defined. Managing a penitentiary house is certainly an interesting task, but it lacks real potential. Jailbreaking, on the other hand, is so much more exciting, in our opinion, and offers such a great gaming experience that it would have been stupid not to exploit. So, we opted for the second alternative.

GS: The game takes place in an alternate world. Can you tell us a little about what makes the gameworld different from the real world?

AR: Although the world of Alcatraz resembles our earthly life in many ways, its political system and technology are quite peculiar. The peculiarity of these "components" obviously makes the whole world a special unity. The political situation of the game is the reminiscent of that in 1984 by George Orwell, the image and the atmosphere are somewhat similar to those of the classic movie The City of Lost Children, whereas the technology is more or less analogous to that in Jules Verne's novels. The whole of the alternate world will present a most extraordinary and diverse environment, in which the objects and the technological solutions look much different from those of our reality. There are no integrated circuits, internal combustion engines, or cellular phones in this specific world, yet they have steam-powered vehicles, a highly developed communication network, and a varied array of technical gadgets, all based on strictly mechanical operation. Besides the diversity, however, it has been a general priority to depict a stylistically homogenous environment in the game.

GS: Alcatraz is a real-time tactical strategy game, right? How many characters will the player control at one time, and how will those characters work together?

AR: There are five main characters in the game, all of which have different skills and abilities: soldier, mechanic, artist, priest, and illusionist. The main characters will always appear on the levels according to the storyline, that is, the player will control a varying number of characters throughout the game. Regarding the cooperation between the characters, there'll be a wide spectrum of tasks that can only be solved using teamwork. To give you an idea as to how it works in the game, imagine one of your characters distracting the attention of a guard, while another character of yours sneaks behind the guard and hits him on the head. Of course, there are more complex forms of teamwork in the game, which I cannot reveal now.

GS: How will Escape from Alcatraz be different from other real-time tactical strategy games?

AR: Besides the attractive title, the game has many assets. First, it touches upon a very popular and thrilling theme, jailbreaking. Second, Alcatraz has an elaborated background story adding to the atmosphere of the game. Third, the utilization of the state-of-the-art technologies (motion-capture, Maya, etc.) as well as the fascinating atmosphere and graphical style constitute a unique blend among other titles. In addition to that, there are several alternative solutions to every puzzle in the game, which provides Alcatraz with unchallenged flexibility and high replay value.

GS: What stage is the game at right now in development, and what is the team working on right now?

AR: All in all, Escape from Alcatraz is going through a very rapid development process now. Almost all the levels in the game are finished on the designers' part. Steady progress has been made in the field of artwork with respect to scenes and characters as well. Our coders have just finished a level editor, which speeds up the process of level design, and now they are getting down to coding essential features required for AI like pathfinding, etc.

GS: When can we expect to see this game in stores?

AR: Escape from Alcatraz will be released in Q4 2001 by CDV.

GS: Is there anything else you'd like to add?

AR: Don't miss the game! The developers have put so much energy into creating Escape from Alcatraz that they even visited a real prison in Hungary and took up the risk of interacting with genuine jailbirds! This very experience and the love of details in general are bound to overwhelm the player with lots of hours of great gameplay.

For more information, take a look at our previous coverage of the game. 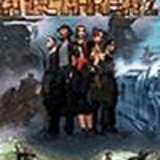