The UK publisher announces the acquisition of the development studio.

Empire Interactive has announced that it has acquired the UK-based development studio Razorworks Limited. The studio was founded in 1996 by Kevin Bezant, Todd Gibbs, Dave Proctor, and Matt Smith, and it went on to create two helicopter flight simulations, 1998's Apache Havoc and this year's Enemy Engaged: RAH-66 Comanche Versus Ka-52 Hokum. Both games received critical praise from the media; Comanche Versus Hokum is one of GameSpot's simulation games this year. The studio is currently working on the PlayStation 2 version of World Sports Cars in cooperation with West Racing, which is developing the PC version of the game. Both versions of World Sports Cars are scheduled for release in 2001.

For more information about the games mentioned above, follow the related links listed below. 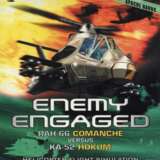