Raven's first-person shooter based on Star Trek: Voyager will be in stores soon. Find out what to expect and check out these new screens from the finished game.

The Elite Force multiplayer mode is called holomatch, and it includes a series of themed holodeck combat scenarios. These range from fairly conventional Star Trek battlegrounds aboard Klingon and Borg vessels and the like to stranger locales such as a medieval castle under siege and a Wild West ghost town. These sorts of settings are justifiable since the entire setting for the game's multiplayer mode is the Voyager holodeck - it's all supposed to be a simulation. Elite Force uses the Quake III Arena engine for its graphics technology and also borrows a lot of multiplayer elements from id Software's hit game. The ship's computer even calls out "Three frags left" to let players know how many points are left until the end of a match, much like in Quake III.

While Elite Force's multiplayer mode is reminiscent of Quake III's, the single-player mode clearly draws from Half-Life's. Players initially have the option to play through a narrated holodeck tutorial that explains how to move and how to use their weapons. They also have the option to choose from either a male or a female player character, both of which are referred to by their surname, Munro, over the course of the game. The two characters each have their own distinct voices and appearances during the game's frequent scripted sequences and in-engine cutscenes.

The action begins aboard a Borg vessel, where several of Munro's crew are being held captive by the relentless android race. The Borg move with the same distinctive lumbering gait, and have the tell-tale laser-targeting reticules, that quickly popularized the technology-hungry species in The Next Generation television series and Star Trek: First Contact feature film. In this first sequence, players must destroy the Borg power generators to deactivate their foes in the area. Players might be able to take a few of their foes down with their conventional weapons, but they'll soon adapt to their foes' energy beams and become immune to the attacks. Early on in the game, fortunately, players will find a prototype weapon, which has a modulating energy frequency that prevents the Borg from adapting to its firepower.

The single-player game is filled with scripted sequences and fast-paced firefights. The game's character models are expressive and finely detailed, and the weapon effects are bright and as deadly as they appear. The game has a roughly proportional number of energy-projectile and beam weapons, which make the arsenal seem very high tech and should also make it especially preferable for fans of weapons like the Quake III railgun. Although Elite Force is clearly intended for fans of Star Trek: Voyager, at the same time, the fact that it's so clearly influenced by two of the most noteworthy first-person shooters to date should give it a mainstream appeal among action-game players. The game's clever multiplayer premise, as well as its apparently well-designed single-player story, gave us a very strong first impression.

Stay tuned for GameSpot's full review of Elite Force early next week in time for the game's retail release, but until then, check out these new screenshots, which show off some of the impressive weapon effects and interesting settings from the game. 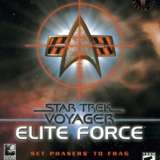