Following the successful launch of Commandos 2 on the PC, the game is on its way to the Xbox.

Eidos Interactive has officially announced that it will bring the tactical-action strategy game Commandos 2 to the Microsoft Xbox. Developed by Spanish firm Pyro Studios, Commandos 2 lets players control an elite group of Commandos during World War II. Players must venture deep into enemy territory to complete a series of mission-based objectives. These scenarios involve action both indoors and outdoors in a variety of locations, including the infamous Colditz prison, the Eiffel Tower in Paris, and the Taiho aircraft carrier.

"Commandos 2 offers the player a totally absorbing gameplay experience with unrivalled graphical detail," said Ignacio Perez, CEO of Pyro Studios. "We will be aiming to fully exploit the power of the Xbox to help us achieve our aim of creating a game more real than real life."

"Eidos firmly believes in developing key franchises and the Commandos franchise is one of our strongest," said Jonathan Kemp, European managing director for Eidos. "Bringing Commandos 2 to the Xbox will enable a wider audience to experience the compelling gameplay and stunning graphics of Commandos 2."

There's currently no information on a release date, but we'll keep you updated. 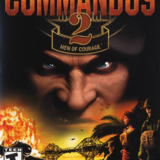