Eidos Interactive is teaming with Free Radical Design, a development company with members responsible for Golden Eye and Perfect Dark for the N64, to bring Timesplitters to PlayStation 2.

A first person shooter in the mold of Unreal Tournament and Quake 3, Timesplitters puts unique characters in levels spanning a century from 1935 to 2035. The game's story, which, according to Eidos, will ultimately take a back seat to the rapid FPS shooting action, involves an evil race known appropriately as the Timesplitters. Waking from an ancient sleep, this tyrannical cult uses shards of crystal to infiltrate the fabric of human history, imposing greed and conflict into the world.

The game features a first-person adventure mode, and split-screen modes for up to four players, including deathmatch, capture the flag, and last stand scenarios. Timesplitters also has an intuitive map creator, where players can group existing pieces like hallways and rooms to build their own multi-level deathmatch arenas.

Timesplitters, being developed exclusively for Playstation 2, will be released on Sony's console this holiday season. 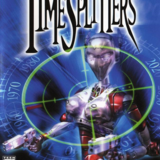