3DO will publish four story-driven installments of Heroes of Might and Magic III in an effort to attract a more general audience.

Just before ECTS, 3DO announced that it will publish a four-part game series this fall entitled Heroes Chronicles. Borrowing the mechanics and engine of Heroes of Might & Magic III, Heroes Chronicles focuses on story-based campaigns in a way that 3DO hopes will draw in game players yet unfamiliar with the strategy-focused main series. Heroes of Might and Magic is a series of turn-based strategy games in which fantasy armies are led by hero characters who gain powerful abilities and items as the battles progress. Each part of the new series will include one single-player campaign weaving together story- and quest-based maps. Heroes Chronicles will also de-emphasize resource management and will not include multiplayer support.

Heroes Chronicles tells the story of Tarnum, a hero who is judged unworthy by the gods and is sent down to fulfill a number of quests that take place hundreds of years apart. The first part will fill in the story just preceding Tarnum's judgement, while the rest will follow his adventures as he returns to fulfill his fate.

Each installment of Heroes Chronicles will be priced at US$19.95. The first two parts will be released in late September, while the last half of the series will be published in November. 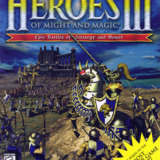