See the first screenshots from the update to the SNES shooter Phalanx that's coming to the GBA.

A mysterious alien race has seized the colony of Delia IV, the solitary terran planet in the outer frontier arm of the Andromeda galaxy. Players assume the role of Rick Sanada, a genetically enhanced pilot with reflexes 33 times faster than those of ordinary humans. Stepping on board the Phalanx A-144 prototype strike fighter, which is equipped with the most advanced weapons ever created, players will be thrown into a side-scrolling shoot-'em-up. There will be eight different environments in the game and countless power-ups to upgrade weapons and special attacks.

Phalanx for the Game Boy Advance will be published by Kemco in November. 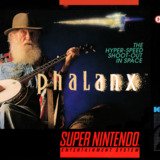