The follow-up to Echochrome is just as mind-bending as its predecessor, with a heavy focus on recording your movements and interacting with your past self.

Echochrome was a mind-bending PlayStation 3 puzzle game that had players controlling the world that the character walked through rather than the character walking on the screen. Players basically had free reign to twist and rotate the environment until what appeared to be an obstacle from one perspective was no longer an issue from another view. In other words, it messed with your head.

Echoshift is Sony's follow-up to Echochrome, and it doesn't look like it'll be sparing your mind any trauma either. It's being developed for the PSP, and we recently had a chance to check it out on the show floor of this year's Tokyo Game Show. Echoshift takes the recently popular gameplay mechanic of recording your movements on a 2D plane and allows you to then interact with your previously recorded self (or echoes, if it's easier to think of it that way). It's a mechanic that added a lot of life to Braid, and it looks like it'll do the same for the upcoming games The Misadventures of P.B. Winterbottom and Ratchet and Clank: A Crack in Time.

Echoshift maintains the same starkly minimalist aesthetic as Echochrome as you control a small figure walking along platforms marked only by a black outline on a solid background. But this time, there are several splashes of color. In the opening stages, these splashes of color are actually platforms that can be either activated or deactivated when you press a nearby button of the same color. Your goal is to either hit the button to replace missing gaps on the ground or get rid of walls in your way and ultimately make it to the door at the end of the level.

The trick is that you need to use that aforementioned recording mechanic to make it to the end of the level. See, you're saddled with a strict time limit for each level that makes it impossible to achieve success in one go. When the time limit expires, you'll start a new attempt that can interact with your last attempt, creating a system of layered interactions from every one of your previous time limit windows.

As an example, you can use your past self to walk to a switch on the far right end of a level so that your future self can cross a gap at the far left end of a level without having to rush back to it. You might also have your present self activate a switch at the bottom of a stairway so that your future self can cross the gap at the top without having to rush up it.

Later, you'll encounter booby traps like a falling block that forces you to mash the circle button to keep it from crushing you. The more clones that get caught under it, the faster you can get it off of you, and the more likely it'll be that you make it to the door at the end of the level in time. We even took a peek at one of the last levels, which reduced your perspective to a small spotlight immediately surrounding the character, with the rest of the screen blacked out under darkness. We'll admit that we weren't able to solve that level in the brief window of time Sony allowed for gameplay sessions in its booth.

Echoshift does look interesting, though. It's certainly a game that's going to tax the old noggin, but if that's what you're looking for, you may want to make room in your PSP when the game is released later this year. 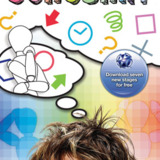