The dodgebrawl game has passed another major user milestone.

EA's new "dodgebrawl" game Knockout City opted for an usual launch strategy, with the game being offered completely free as part of a Block Party trial for the first 10 days. This approach seemed to work wonders to attract players, as the game's Twitter account has announced that Knockout City has reached 2 million players so far. Update: the figure has now climbed to 5 million.

EA said this event "surpassed expectations," though the publisher never said what it's expectations were in the first place. Whatever the case, EA is proud of the achievement.

"This party was unforgettable in many ways, and we're so excited to see the support and positivity pouring in from you, our community! Since launch, we’ve seen 5 million new brawlers join us in matches, there's been amazing--and unexpected--gameplay, hundreds of thousands of Crews were formed, over half a billion KOs landed, millions of hours of gameplay were watched, and--dare we say it?--thousands of friendships were made along the way. Who knew you could bond over hitting one another in the face with a dodgeball?" EA said.

While the Block Party event has ended, you can still play Knockout City for free up to a certain level--read more about that here.

Welcome to Knockout City, population: YOU! Well, you, and TWO MILLION of your friends!
If you haven't joined in on the #BlockParty free trial, why the heck not? Knockout City is available free to try right now!
1/3 pic.twitter.com/Wo9u0R4Z9v

The Block Party free trial is only available for another 5 days, 15 hours, 35 minutes. Plus, if you purchase Knockout City before it ends, you'll get a bunch of exclusive gear, so grab a friend and get in! 👇👇👇
3/3 pic.twitter.com/3ZvsLllbpD

Knockout City's Season 1 began May 25, and it adds a new map, Jukebox Junction, as well as more contracts and new playlists. Check out the Season 1 trailer below to learn more about what's in the Season 1 update.

Inspired by dodgeball, Knockout City is a multiplayer game where players try to knock out other players using a ball, which can have all different types of special properties. The game is developed by Velan Studios, which is the team that made Mario Kart Live: Home Circuit. 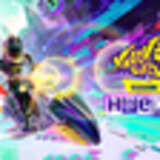