Fight against giant ants, spiders, and other enemies in this stylized version of the classic third person shooter.

Earth Defense Force: World Brothers, the latest title in the save-the-world-from-giant-bugs series, is coming to the West on Nintendo Switch and PS4 early next year, GameSpot can exclusively reveal. It features a voxel art style that's a big departure from the series' usual bleak and foreboding visuals.

D3 Publisher, which co-develops and publishes the series with Sandlot, XSEED Games, and several other studios, said that the change in style is meant to help their developers create a "fun and casual EDF to enjoy while [fans] wait for the next series title." You can check out a new trailer below.

"We will continue to do our best to make this series constantly evolve for players," said Earth Defense Force: World Brothers producer Nobuyuki Okajima. "However, doing so gives our dev teams tremendous pressure, leading us to longer development cycles for each title."

D3 Publisher announced that Earth Defense Force 6 would be coming sometime in 2021 in June, although the company did not confirm which platforms it would launch on. The most recent game in the series, Earth Defense Force: Iron Rain, launched in April of 2019.

World Brothers is the first game in the Earth Defense Force series to come to Nintendo Switch and Okajima hopes that it will bring younger fans, who can't play the other entries due to their mature rating, to the series.

Like the Earth Defense Force games before it, World Brothers features a world under siege by extraterrestrial invaders, the Dark Legion, who have "torn apart" Earth according to the games' website. Players take the role of EDF soldiers who serve as the final line of defense against intruders.

Iron Rain was the first Earth Defense Force game to have a simultaneous Western and Japanese release date and D3 Publisher is continuing that worldwide release strategy with World Brothers.

"We originally developed the game for the Japanese market, we surprisingly found out that so many enthusiastic U.S.fans love EDF," Okajima said. "EDF may not be a major title, but we will make sure the English version will be available for EDF soldiers in USA and beyond." 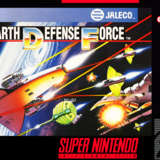