The latest installment in Electronic Arts' series of soccer games is now available for the PC and four different console platforms.

Electronic Arts has shipped five different versions of FIFA 2003 to stores across North America. The latest game in a long-running series, the 2003 edition is the most realistic yet, and it has been developed with assistance from the EA Sports soccer council, which consists of four top soccer players: Edgar Davids, Ryan Giggs, Roberto Carlos, and Landon Donovan.

The game features no less than 16 different leagues, 450 teams, and around 10,000 players. For the first time in the franchise's history, the PS2 and Xbox versions of the game will allow players to choose between English and Spanish commentary, and all versions of the game--with the exception of the GameCube veriosn--will include optional Spanish menus.

FIFA 2003 is now available for the PC, PlayStation, PS2, GameCube, and Xbox. For more information, check out our previous coverage of the game using the links to the right. A Game Boy Advance version of FIFA 2003 is also in the works, and it's scheduled for release on November 12. 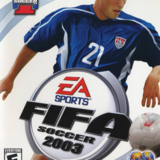