The latest in Electronic Arts' long-running hockey series is sent off to stores.

Electronic Arts has announced that it has shipped NHL 2003 for the GameCube, PlayStation 2, and PC. One of the biggest improvements to this year's game is the dynamic deke feature, which gives players full control over the hockey stick. In addition, goalie AI and puck physics have been refined and behave much more realistically than in previous NHL games.

The Xbox version of NHL 2003 is still scheduled to ship on October 8. 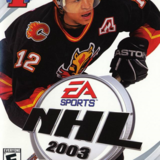