Over the past couple of years, Electronic Arts has teased gamers with trademark application filings for some of its more beloved classic franchises, ranging from Syndicate to Road Rash, Populous, Theme Park, and Wing Commander. Now, one more filing can be added to that list, as this month the publisher asserted its claim on the Alpha Centauri name.

EA's most recent filings with the US Patent and Trademark Office came on August 1. Two applications were submitted, both for the Alpha Centauri name. The first lists "entertainment services, namely, providing an on-line computer game" as its primary use. The other explicitly states that the name will be used for "computer game software."

The mark is presumably in reference to EA's classic turn-based strategy franchise Alpha Centauri, which was developed by Firaxis Games before being purchased by Take-Two Interactive. A collaboration between Sid Meier and Brian Reynolds, Alpha Centauri received critical acclaim upon its release for the PC in January 1999. The franchise has lain dormant since Alpha Centauri's first and only expansion, Alien Crossfire, shipped in October 1999.

EA has thus far made little use of its trademarked classics. The Darkness developer Starbreeze has been attached to EA's Syndicate revival, though that project has yet to be formally announced. Reports emerged earlier this week that EA will be releasing a Theme Park title for iOS later this year. 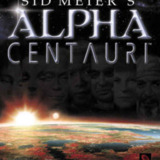