Electronic Arts has filed two new trademark applications that suggest the publisher may be planning to resurrect its long-dormant Desert Strike series.

As spotted by Fusible, EA filed a pair of trademark applications with the United States Patent & Trademark Office (USPTO) for "Desert Strike" on November 25.

Both applications cover "computer game software," though no other details are provided. They are registered to EA's headquarters in Redwood City, California. A representative for the company told GameSpot, "Nothing to announce today."

The new Desert Strike trademark applications do not necessarily signal the return of the series, as EA may only be covering its bases. 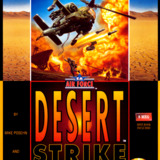