Electronic Arts has today released new information on the PC and console versions of Galidor: Defenders of the Outer Dimension. The game, which is currently in development at UK-based Asylum Entertainment, is based on the Fox Kids TV series of the same name and will see players assuming the role of Nick Bluetooth, who is attempting to rescue his friends from the evil tyrant Gorm.

As Nick, players will have to travel through three distinct realms doing battle with numerous different enemies and boss characters as Nick searches for his friends and looks to rid the outer dimension of its evil ruler. Players will use a transdimensional navigation module known simply as The Egg to travel between realms, and they will have the ability to absorb enemy attributes and abilities via a technique known as glinching.

Galidor: Defenders of the Outer Dimension is currently scheduled for release on the PS2, GameCube, GBA, and PC in September. We'll bring you more information on the game as soon as it becomes available. 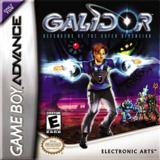